Busy April In the Neighborhood Associations!

All kinds of interesting things in the Neighborhood Associations at the start of April!

On the agenda is information about the street light funding concepts; about the Eola Drive and Edgewater/Rosemont/Second Street Projects; and the Orchard Heights East Subdivision.

They'll be talking about possible change at the Fairgrounds, a large parcel of state owned property in the neighborhood.

From the minutes is information about the prospects of a crosswalk near Marion and 13th by Safeway:


Preliminary idea is to install two flashing beacons for cars on 13th, with crosswalk across Marion...Still working on pedestrian improvements one block south at Center. Want to widen ped island and bring the crossings to the island.

The minutes from the last meeting has information on the Boise Project:


A Public Hearing for the Boise site will be April 8th at 6:30. It will address the 4 acres west of the railroad tracks and north of Pringle Creek. A new street, crossing the tracks at State Street and then turning south to cut in front of the carousel and then on to the property, is being discussed. A 3-story residential building adjacent to the Eco-Earth ball, the amphitheater, and Minto Island footbridge is also proposed. Worries are that another “state fair amphitheater” situation is being created that may affect the park. Neighbors expressed concerns that this proposal, along with the residential care proposal that was in the Statesman Journal, will lead to no interaction between the park and the improvements. If shops, restaurants, walking paths, viewing areas, and other activities, were placed next to the park, as earlier proposed for the mixed-use development, then the park visitors would frequent them and support them and those establishments would also draw people to the park. It will be of little use to place those spaces that the public would frequent, south of residential development that will act as a barrier.

The idea of a median on Fairgrounds Road also met some questions, and City Traffic Engineer is on the agenda for further discussion of it:


There are some concerns about lost parking and visability issues for cars trying to turn onto Fairgrounds Road.

Information about a new farmer's market!


An evening farmers market is planned in the courtyard at Broadway Commons. It will run from 4:00-8:00 pm each Thursday during June, July and August. The vendors will be the same as those who participate in the Saturday and Wednesday markets. Broadway Commons will move its music performances to that night, also. Right now there are about 20 vendors committed. The calendar will include an event on the 4th of July.

Finally, on the agenda is also an item about the "North Mall Heritage Houses", the cluster of houses on the south side of D street between Winter and Summer Streets. I wonder if the State is thinking about selling them off?

On Tuesday, April 9, from 6:30 - 8:30 p.m. at the Court Street Christian Church, 1699 Court Street NE, Northeast Neighbors and the Southeast Salem Neighborhood Association will jointly kick-off the process to write an updated neighborhood plan. 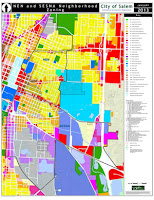 As you can see from the zoning, the areas embrace some of the city's most diverse set of land uses.  They also have a significant stock of old houses and a street grid from the streetcar era and earlier, and offer very walkable streetscapes - though there aren't always walkable destinations.  SENSA lacks neighborhood grocery stores, for example, and too much development is strippy, and along car-dominated major arterials.

They are also prime areas for increased density, and this needs to be balanced with retaining historic housing stock and moving away from that strip- and auto-dependent development along busy roads.

In the next generation these are likely to be neighborhoods in transition, and there's great opportunity here to create even more vibrant districts - or to 'eff it up and intensify sprawl or blight.

Every planning process starts off with great optimism and possibility.  Truly, it is a blank sheet of paper.  But the processes are only as good as the sustained momentum behind them.  If Salem had actually carried out what they'd intended in many of the forward-looking plans from the 80s, 90s, and 00s, the city would be a different place today.  At the same time, advocates have to spend a lot of energy saying "no," trying to foil and frustrate dumb ideas like the proposed giant bridge and highway.  Here's an opportunity to shape something for enthusiastic assent.

If you live in these neighborhoods, consider getting involved! 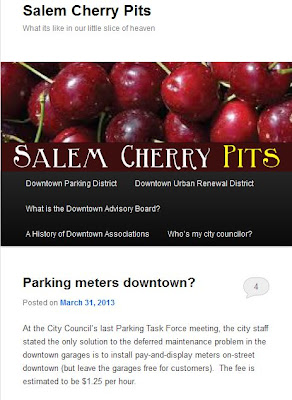 It's pretty clear this is an addition or successor to the Salem Downtown Partnership materials. The interests are the same. But the tone is a little different: "The pits" aren't, after all, generally the best parts, and the boosterism seems gone.  I like the tone of critique.

They seem more committed to free parking than seems sustainable or wise, but they're also asking important questions about urban renewal.

If we all agree to abide by the best available evidence, and not to be limited by prior commitments, robust debate is the best we can do!

So check it out!
Posted by Salem Breakfast on Bikes at 7:00 AM