So a week or two ago the first deadline passed, and bills that did not have worksessions or hearings scheduled officially died in committee.

(Sausage, it's like sausage making!  Even with the new "Oregon Legislative Information System," deadlines like this aren't posted in obvious places, and to non-experts such deadlines remain "secret voodoo" known only to initiates.  Sometimes it doesn't seem very democratic or accessible to ordinary citizens.)

Down at the end of the post is the scrap heap and dead pile.

At this point it's hard to see that any significant legislation will pass on behalf of people who bike.  Even transportation-related bills of a more general type seem to suffer from an enthusiasm gap.

Once the session ends, it's possible that the bill for which there was the most enthusiasm will be the exception from the cel phone ban for those paragons of careful and virtuous driving, the taxicab operators.

Two hearings, one on Wednesday, May 1st on a mileage tax; the other on Wednesday the 8th on the celphone exemption for taxicab operators.  See below for links to the hearings agenda.

The different piles after the jump. 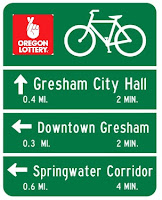 Road Safety (and "Safety")
Bills Having Died without Work Sessions or Hearings
Bills Moribund in Committee, almost certain to die, or looking doubtful
All of this year's legislative updates are tagged 2013 Legislative Session.  If you know of something of interest, please add it in the comments!
Posted by Salem Breakfast on Bikes at 12:01 PM