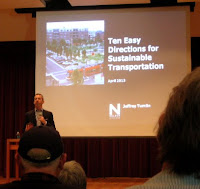 One City Councilor, and a whole lot of the Community Development Department attended. Many fewer from Public Works and Urban Development were there. (Though at least some of Public Works were likely at the Active Transportation Summit at the Conference Center.)  The big sad face, of course, is that most of the people who actually make policy, especially the seven other Councilors, as well as the Mayor, and the City Manager, were not there.  And we didn't see folks from the Chamber of Commerce or Salem Health, either.

But it was all so very relevant to current topics in Salem!  Our supposed "need" for a Giant Third Bridge and Highway, and our actual need to reexamine parking downtown were right there.

Regular readers here would have found little new.  But there were still some new metaphors, new ways to conceptualize old ideas.

One favorite idea was to underscore in a table the difference between the way an economist looks at the value captured by a congested roadway full of people on foot, on bike, in bus, and moving slowly in cars, and the way a traffic engineer sees the same congested road.  Tumlin's big on shifting the conversation from engineering analysis and metaphors to economic ones.


A traffic engineer sees rapid, free-moving traffic as an "A."  But an economist sees only through-traffic and empty space on the road, with no people stopping and spending money.  A traffic engineer sees congestion as a failed roadway, as an "F," but an economist sees a vibrant streetscape full of people lingering and spending.

Their perspectives are really reciprocals of each other.  But it shouldn't be so difficult:  When people slow down and want to linger, they spend more!

And a city whose congestion problems are solved is like Detroit - depopulated and desolate.  Only by ruining your city, he said, can you solve congestion.

You might recall the 1996 Downtown Plan with 30 foot sidewalks on Court Street!

Tumlin also humorously reminded us that we mainly have two ways to allocate resources, by asking people to spend time or money.  The Soviet approach is the classic bread line:  Provided you are able to wait, you stand in line for hours to get your bread.   The American and capitalist approach to allocate goods and services is to charge a price.

Our approach to traffic and to parking is the bread line!  You wait in congested traffic and circle the block looking for a parking spot.  He's like, why do Americans suddenly embrace the bread line and quit thinking like capitalists when faced with traffic and with parking?

You can read more on one side of this in a lively exchange on downtown parking meters here.

(It's fair to ask why we should subsidize walking, biking, and transit.  Well, until there's a level playing field, because of the negative externalities of car use, and the positive externalities of walking, biking, and transit, it's appropriate to support these and to try to price and capture some of the additional and large externalized costs of car use.  We have a transportation market failure that unfairly subsidizes car use and penalizes walking and biking and transit.)

One of the things about these talks is too often they are preaching to the choir. Just look at all the excited rah-rah generated by the active transportation summit. It's nice to be around people with whom you're not arguing, but change only happens when former opponents become allies. Persuasion is the essence.  (Props to No 3rd Bridge for at least one change of heart at Council on Monday!)

Discussing the wacky inversion from American-to-Soviet thinking about cars is funny and interesting and all, but I'm not sure we can go into a Downtown Parking Task Force meeting and talk about how Free Parking downtown is like a Bread Line, or go to Council and talk about how tolling or congestion pricing is more rational than Bread Line Traffic Slow-Downs.

Fortunately, Tumlin was also big on measurement.  One of the presentations at the active transportation summit was about the economic value of bicycling customers in Portland. The NYC DOT is also collecting data on retail sales increase adjacent to changed roadways.  Salem merchants too often say, "but Salem's different."  How are we going to collect the data that's going to change their minds?  How do we get over that hump?  That was the part Tumlin could not address.

Were you there? What stood out to you?

The City has posted the video:

Excellent summary SBOB. I wish CCTV had filmed the talk so more people could see it. It was really outstanding. I liked the part about how the human animal is optimized for walking 10,000 steps a day and that driving to the gym doesn't substitute. When is someone going to expose the "exercise" myth? My wife and I took a recent trip to Italy where people eat huge meals of pasta and meat and never get fat. I'm convinced it's not the red wine, but the walking. They have the most delightfully walkable cities in the world -- even Rome.

You're right! It's crazy how people want to drive to the gym instead of using active transportation to integrate moderate exercise into daily life.

(Hope you saw this note on Rome and Salem side-by-side, by the way! Do you have further thoughts on the Italian urban environment?)