The poster for August's First Wednesday is out!  And the theme is cycling - unicycling, bicycling, heck even tricycling.

But that raises a pair of questions:  Who's going to cycle downtown who isn't already cycling downtown, and what is the City going to do to make it easy for occasional or new cyclists to venture into the "black hole" of downtown traffic?

City plans are a bit thin at the moment, and it's not clear they've thought through what a bike-focused event might actually look like and what it would take to attract meaningful numbers of people to choose bikes instead of cars - but things seem sure to heat up as the 7th approaches!

Still, there are some things maybe to think about for next year. 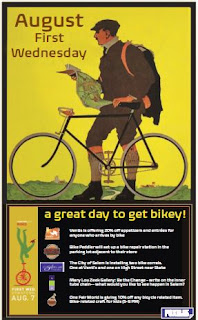 FoxBlue has created a poster with details on some of the downtown offerings.

Ventis and One Fair World are offering discounts, and the Peddler will have a workstand and repair station.  Mary Lou Zeek will also have an interactive art project.
Posted by Salem Breakfast on Bikes at 7:00 AM

I like the idea of a cycle track through Downtown and a bike show. But not just vintage bicycles. A show with commuters, cargo bikes, and all dimensions of bicycles would be a better idea. Show people what an everyday bicycle can do!

Those are all great ideas. The crit won't happen until the City waives the 5k fee they wanted to charge us. I suppose the lackluster approach is to ensure failure (yes, I have become that cynical!). The City can say "we tried an no one showed!" I'll be there with bikes and kids!

How about a night-time ride.

Montreal has the Tour de Nuit which attracts thousands during its annual Bike Festival.

Boston, MA has an annual all-night ride which takes 100-200 cyclists around Boston and nearby communities from midnight to 8 am, stopping frequently to learn about interesting architectural and historical sites.

I've done the former once and the latter several times when I lived there. I've heard of other night rides in other places too.

What to do, where to go, and how long to ride can be whatever Salem wants.

Jeff: Didn't know the fee for a race was going to be so high. Yuck.

Thanks for the poster link!