Morningside Neighborhood Plan out for Review; Vote on Wednesday

Remember, tonight is the work session on transportation for the NEN-SESNA neighborhood plan - the areas around Englewood and Bush Schools.

It's a blank slate.

What about a nearly finished product?

There are two reasons it's hard to know what to say about the it.

The first is general, about its meaning and intent.

Most of us approach language with an interpretive charity, right?  As we decide what it means, we want to give it the benefit of the doubt, we assume it is sincere, and we expect action to follow intention.

But almost inevitably, though, advocates and even ordinary citizens in Salem reach the point where they realize that too often plan language is empty gesture, essentially meaningless, a theatrical palimpsest on which others write the script that's actually followed.  It's not always this way, of course, but it seems like the technical details - is a sidewalk necessary here?  How many bike and car parking stalls are required? etc - in a plan are not so difficult to see enacted, but that more general policy goals really tend to be diluted or disregarded.  So what, really, is the value of a plan when its language is not likely to be interpreted very closely?  How cynical should we be? 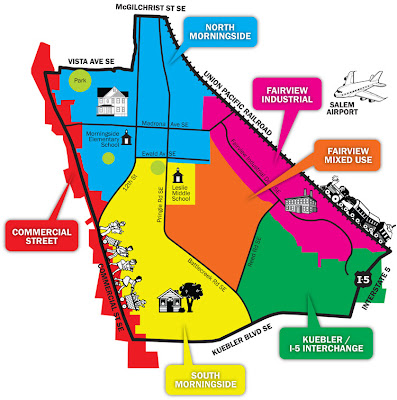 The other reason it's hard to know what to say here specifically is that the area it covers is way too big and diverse to constitute an actual neighborhood.  It's an administrative planning unit bounded by Commericial, Kuebler, the railroad, and a bit of I-5!  How is this an actual neighborhood?

As a document of compromise and negotiation and multiple interests, it's not something that is necessarily going to be coherent. Nevertheless, like many other neighorhood plans, and perhaps more than most, it is a jumble, more a grab-bag than an articulation of a vision.

According to the plan,

The section on commercial areas shows some of the difficulties.  (One important note of background:  In lawsuits and mediation with the State, the City has contested the language of "activity nodes and corridors" since 2005 and never embraced it whole-heartedly after successfully stone-walling DLCD; some of the ambivalence, or even contradiction, here may in some sense be intentional.)

The introduction to the section on Commercial Development says,

Even though they are on the edges, two giant roads shape the "neighborhood":  Commercial running north and south, and Kuebler running east and west.  These are significant barriers to anything but auto travel, and essentially all non-residential, commercial development is confined along these corridors.

One of the three formal goals is:


GOAL 7
Promote the creation of pedestrian-friendly commercial centers within activity nodes and corridors identified in the Salem Comprehensive Plan.

It may be, alas, that the formally defined "activity nodes and corridors" identified in the Morningside area are fundamentally so auto-centric that they cannot be other than inimical to walking and biking.


POLICIES:
7.1 New development along Commercial Street SE should contribute incrementally to the retrofit of this valuable community resource as a vibrant, transit-integrated, retail and service corridor with design elements promoting usability by pedestrians and cyclists as well as motorists.
7.2 Commercial development is encouraged to provide connections to existing or planned residential areas to increase alternative modes usage.
7.3 The Morningside Neighborhood Association supports development that promotes a neighborhood-commercial character by incorporating active and visible ground floor work spaces adjacent to the public right-of-way, enhances ‘walk appeal’ and provide facilities for pedestrians and bicyclists as well as motor vehicles.
7.4 Encourage new commercial buildings in excess of 30 feet in height to be oriented toward the streetscape and placed as close to the street as established setbacks permit, when possible.


7.5 Along the Commercial Street corridor, projects located at street corners are encouraged to provide a distinctive vertical design element to anchor the corner, define the street edge and create a sense of enclosure.

RECOMMENDED ACTION:
A7.1 Regulatory incentives should be developed, such as (but not limited to) height bonuses or setback reductions, to encourage the placement of new commercial buildings adjacent to the streetscape with parking located behind or to the side of the building (Figure 3.8).

These are great ideas, but how much really can they change things and how much will they actually be implemented?

Instead, the focus is on retrofitting Commercial Street, and without  large-scaled intervention and transformation, it's hard to see how this language of retrofitting and incremental change will lead to anything more - in the absolute best case! - than lipstick and other cosmetic changes.  People who live near enough to Commercial to walk, do not like to because it is unpleasant.  However, most people in the Morningside neighborhood probably do not live near enough to Commercial to make it realistically walkable.

The section on Transportation is interesting, and it would be nice to see other neighborhoods ask for a multi-modal LOS analysis:


GOAL 10
Foster a local transportation system that achieves the following:


Sections on Fairview, the I-5/Kuebler interchange, Parks, and Sustainability are also interesting.

Have you read it?  What do you think?