The Salem Area Trails Alliance is holding a workshop today, postponed from last month, for a "family friendly pump track, jumps and xc trails" in Wallace Marine Park north of the softball fields.

This could be a link in the wider trail system proposed by SATA for the river and Eola Hills, as well as a terrific urban facility for off-road biking!

What kinds of things would you like to see?  From SATA:


Calling all dirt artists! We need your input. We have a bike park design workshop planned for June 28th (Time TBA). What elements would you like to see in a bike park? Email SATA at salemtrails at gmail dot com if you're interested in attending the workshop. We'd really like to hear from a few local teenage riders. Thanks, Jeff...

Wallace bike park design workshop has been rescheduled for July 15th (1-4 pm). Please attend if you are available. Meet down at the softball diamonds located in the northern section of the park. 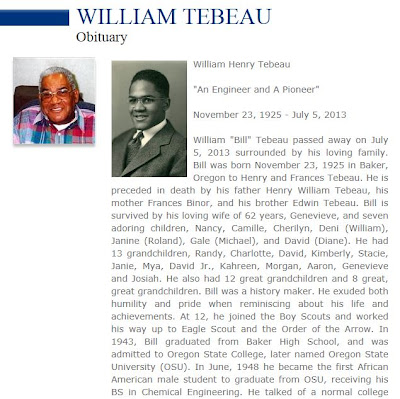 In the news yesterday was the obituary for William Tebeau, who passed away on July 5th:


In June, 1948 he became the first African American male student to graduate from OSU, receiving his BS in Chemical Engineering....

He was hired by the State Highway Department in Baker, presently the Oregon Department of Transportation (ODOT) in 1948. He received his Civil Engineering license, was promoted, and moved the family to Salem in 1956. Bill did everything from construction, surveying, planning, hydraulics, and highway/bridge design in his 36 year career, retiring in 1984, leaving an exceptional impact on the Department.

In a 1988 article the Director of ODOT said that Bill was a cornerstone for the planning and research of Oregon's highway construction/improvement programs, was responsible for mapping Oregon's cities, counties and urban areas and had more influence on the education, personal development, and mentorship of ODOT employees than any other individual he could think of. Deputy Director at ODOT is quoted in a 2008 article that Bill was a great resource for any type of question you had, an endless volume of information, a tremendous engineering knowledge....

Respect.
Posted by Salem Breakfast on Bikes at 9:00 AM