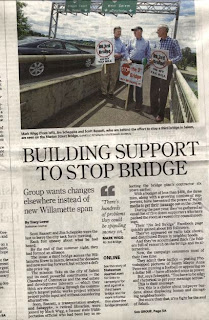 Better late than never, the paper finally ran a piece on the N3B group.  Its timing, of course, is curious:  Long after the City Council deliberations and vote, long after the information might have served the public interest for this milestone.

The approach in the piece, also less analytical and more personality-profile, differs interestingly from a sort of companion editorial on parking meters.

(It should be noted that the reporter behind the N3B piece previously worked in depth on WESD, and is an investigative reporter rather than features writer.  We can hope that her piece is just the start of more in-depth reporting!)

If the paper has seemed locked into the a priori conclusion and circular logic of "we need a bridge because we need a bridge," on the matter of parking meters, in their editorial today they show a significantly different spirit of inquiry, exhibit analytical curiosity and sophistication, and a willingness to innovate and experiment.

They also met with parking meter critics in a formal editorial meeting, a courtesy they did not extend to N3B advocates. 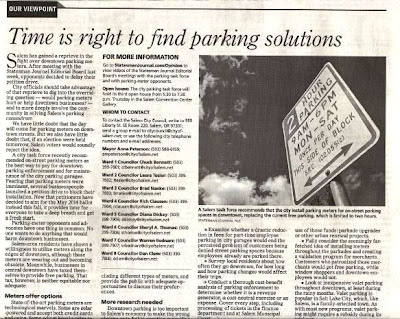 But the spirit in this editorial is frankly close to the spirit of the N3B advocates.

So why the disconnect?


The logic behind tolling and the logic behind metered parking (both so that we better use existing capacity rather than build expensive new infrastructure) are cognate, and wise analysis will make the connection.  If the paper is open to metered parking, why aren't they open to try tolling as part of a lower-cost suite of approaches that could eliminate the need for a giant bridge and highway?

(N3B has taken a formal agnostic position on parking meters, since their members are divided on this question - this is a sign of just how difficult and big are some of the blind spots.  Here is some of the N3B commentary on the SJ piece.)

Streetlight and Mainentance Fee at Council

On Monday at Council, there will be a public hearing on the proposed streetlight fee.  It also relates to the larger issues behind the third bridge and metered parking.

In its current proposal, it would add a monthly fee like this:

But of course the reason for it is that gas tax and other state highway revenues are down.  Electric cars and higher-mileage vehicles are part of it, but the bigger piece is that we are driving less:

In the giant bridge and highway, the prospect of metered parking, and declining gas taxes, here are three transportation and funding issues that are being driven by the same forces - but because we treat them politically as discrete matters, we are not able to formulate better policy.

Ultimately, we choose machine instead of man, and count cars rather than people.  By refusing to refocus our analysis of mobility on the way people might move in a city, we are stuck pumping cars through our roads and streets.

(For more on the streetlight fee, see this Salem Weekly piece and the Staff Report to Council.)
Posted by Salem Breakfast on Bikes at 12:01 PM