Late Friday afternoon last week the latest revision of the Pringle Square plans was approved in concurrent administrative site plan and design reviews. One of the most interesting things about the apartments is they might be the first apartments in Salem with internal secure bike parking!


That room also looks like it might be small, but it's hard to say.  One can wish that it fills up quickly and they have to find more room:  That's the kind of problem you'd like to see!

Moving up to the street level, tucked in just behind the entry driveway will be the public bike parking.

Since it will not be visible from the main entry, and may not be within 50 feet of the "primary" entry, there will need to be good signage.  I'm not exactly sure how this meets code. I worry a little, too, about clearance from the stairwell and adequate maneuvering room next to what appear to be two car parking stalls.

Overall there are still compromises.  Nothing can be done at this point, but the perimeter at sidewalk level still doesn't greet people in an inviting way. Most of the west sidewalk on Commercial will still skirt the concrete bowels of a parking garage.

A couple of conditions that were added to the approval appear to address an element on which the plan at the moment is silent.

It does not appear there is a walk to connect via pathway or staircase to the west sidewalk on Commercial.

The commercial storefronts also drop in a sheer wall on the north face, and there's no external path to draw in people on foot.

The conditions of approval include these, which I believe are at basement level rather than at street level:


Condition 1: A pedestrian access shall be provided along the north face of the lower level building facade, between the buildings and the creek...

Addtionally, in the Staff Reponse on one section:


The SWMU zone...does not require development of the south block...to provide a direct pedestrian conneciton from the west side of Commercial Street to the proposed path along Pringle Creek. Though a direct connection is not required, the applicant intends to try to make such a connection if possible.

Fortunately, there is this interest in making a connection here at least down to the path, and while there is no formal design element or plan yet to address this, it has not been ruled out apparently, and we may see more on this later.  We hope!

Additionally, the commercial space has been brought into the Boise shell, and is no longer an outrigger building of new construction.  Without a sidewalk on the north side of the building, though, the connections are perhaps on the meagre side.  The lack of street-level connections may not matter for the large commercial space, which has doors in the storefront on the Commercial Street sidewalk.

But the two smaller commercial spaces appear to have doors opening only onto the interior of the parking garage. Visitors will have to wander into the garage, and there won't be casual foot traffic! It will be destination only, and I wonder how easy it will be to lease these interior spaces.

Also, the glorious loading dock that faces west and the park looks to be walled in for storage units.  The dock seems like a feature that could have been put to higher use!

Anyway, on the whole it's great to see the project moving forward.

Related in architecture news, at the library, our local Chapter of the AIA is having another round of architecture awards, and the "People's Choice" votes are in the lobby by the History Room. 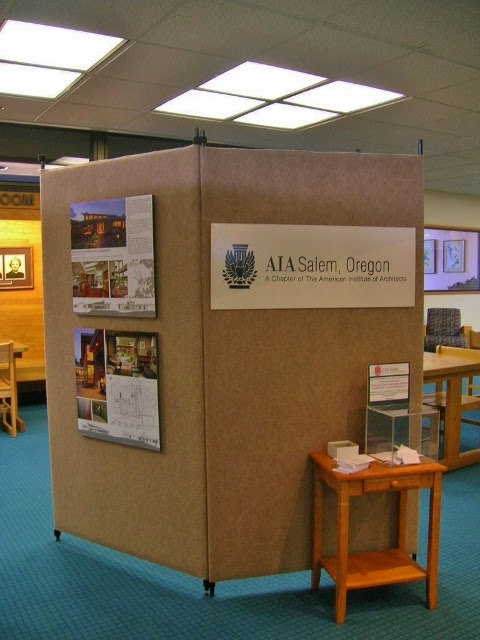 These are buildings that were often planned and mostly executed during the Great Recession, so they are on the low-key side and there aren't many. But check 'em out! (In a few years, the Boise project will be here too!)
Posted by Salem Breakfast on Bikes at 7:00 AM

Where can a person view the full document that you are talking about in this post?

I believe it will be posted to the web for the April 14th City Council meeting.

And here is the decision.