Do we Really Need more Committees? 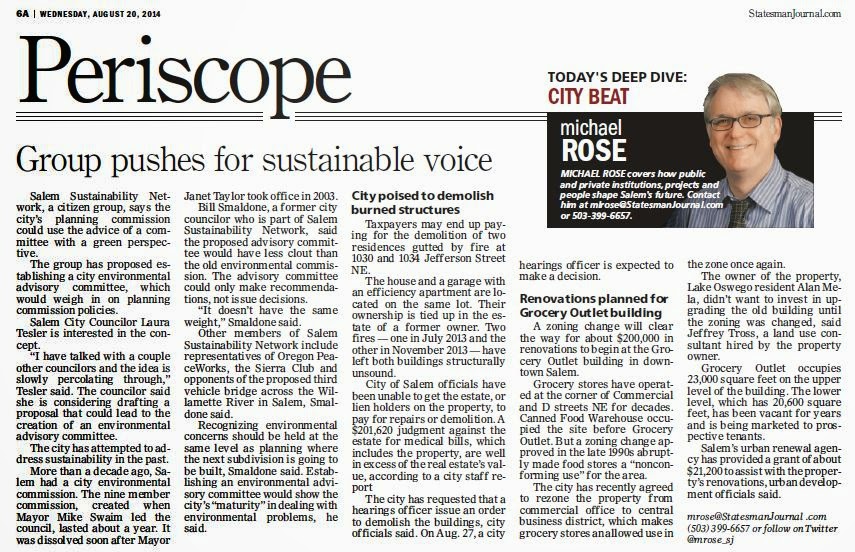 The idea of a Environmental Advisory Committee got some press in yesterday's paper, and it's an interesting one. Apparently Councilor Tesler has some interest in it, and as the concept "percolates" through Council, perhaps it will gain enough traction for a formal proposal.

But here's the thing. We already have a bunch of advisory and even quasi-judicial boards, and it has seemed difficult for them really to lead.
These are just what we have followed here. Maybe you will know more about Parks, the Library, the Budget, Police, Tourism, Human Rights - there's a bunch more Boards and Commissions.

But in general, as a group the Boards and Commissions don't look like they actually are very powerful or very effective. As institutions and by the city ordinances that establish and govern them, they don't look like they are meant to be very powerful or effective. For the volunteer members without staff resources of their own, it is not always easy to develop alternatives to or detailed critique of the staff-driven agenda. Sometimes the committees just rubber-stamp; sometimes they give the illusion and "blessing" of debate, dissent, and deliberation; in all cases they seem like they are meant to sand down and tame any distinction and vision so it's smooth and easy.

Some have observed the large number of vacancies on boards and commissions. Is part of the problem a lack of interest in the citizenry? Instead, I wonder if the lack of interest is a consequence of the seemingly nugatory nature of the positions. It doesn't seem possible to make a real difference.

This is why it has not seemed useful here to advocate for a Bicycle Advisory Committee. Would one help us get a full family-friendly bikeway any faster? Or would it just provide more greenwash and cover, the soothing reassurance of "process"?

If you've been reading BikePortland lately, you'll see even Portland isn't living the dream right now:
It has seemed like the two absolutely necessary ingredients are leadership at the top rank of electeds (which Portland especially lacks right now) and a robust grassroots advocacy. The middle level of advisory committees and their staff handlers look mostly impotent or irrelevant without the two other ingredients.

Maybe you have a different analysis of it all. (Certainty's not possible!)

And it's true that the "the proposed advisory committee would have less clout than the old environmental commission. The advisory committee could only make recommendations, not issue decisions." Its proponents don't argue for much in the way of real power or influence.

Still, I really wonder if an effective solution to our dilatory interests in environmentalism and sustainability really is another committee.
Posted by Salem Breakfast on Bikes at 7:00 AM

Being on a committee can be frustrating if you are swimming against the status quo. Staff has actually forced members of committees to file public records requests if they are seeking information that could contradict whatever the "staff-driven" agenda is.

Speaking of public records, they do not charge committee members a fee, but only because city policy specifically creates a fee waiver for those on a committee. But it still comes off as hostile, when the same staff member will have to compile the information either way.

The fees for everyone else are a problem: The city follows the letter of the open records law and often charges the maximum amounts allowed by law. Brian Hines can tell you all about that.

Not to paint all staff with a bad brush - there are lots and lots of friendly, conscientious people who are readily helpful, and others who are "just doing their jobs" and know who they work for - and it's not the Historic Preservation Committee chair or anyone else on a board/commission/committee.

I have followed a couple of board commissions over the past 25 plus years. The Council has systematically reduced their powers to do anything but advise only. Then when the report comes back it is emphasized that their work is ONLY advisory.

That said, the people appointed are often screened with a heavy had to make sure they are not going to step out of line. They are a vehicle for the staff to push an agenda and create a public front to look like it was a 'public process'.

For 21 years there has been a real public event called "Salem Speaks Up! for Human Rights" because the Human Rights Commission is unable to do any significant work on hearing and resolving racial issues. In the past few years some members have realized this lack of power and have at least tried to carve out a path of doing educational programs.

Right now there are vacancies on the Planning Commission because the Council wants to fill the positions with more development or real estate people.

People who might have the interest to volunteer are either 'selected out' in the screening process, or know that the committee is a fake entity.

The only real committee is the Planning Commission and they have to power to make or break a project. This is why they are so heavily screened.

I have heard rumors that if someone does slip through the cracks and they try to make a difference, they either get 'called into the Mayor's office for a chat' or they are forced to resign over time.

I wish that I could say that other entities are better, but I doubt it. I know that when I served on Salem-Keizer Schools Budget Committee it was just for show.

Here is another issue though that I think we need to be watchful of however, is that sometimes the City hasn't followed the letter of the law in public meeting laws on committees that are appointed by the City Council for short term issues, like the police station location committee. I can't seem to find where they posted notices of their meetings for the first two years that they met. Some recordes were posted in Oct of 2013 that went back to 2010, but I couldn[t find any evidence that they were posting them at the time of the meetings. ORS requires that any committee set up by an elected entity that is designated to advise them, must follow open meeting laws, i.e. publich in a public location and by media available to everyone the date, time and locaiton of a meeting at least 24 hours prior to that meeting.

24 hours prior notice is the minimum requirement of the law. But as you and I know most people are left out when they do not have time to put something on their schedule a few days ahead of time. The current EOA-HNA committee is giving bearly 24-hour notices and since they do not have a regularly scheduled meeting time or place, it is pretty hard to attend on such short notice. I believe this is by design.

So, if the Mayor and City Council really want citizen participation thins would clearly be done differently. The public gets the message.

CATC has been a total disappointment and marginalized in every single issue concerning traffic that has affected the city since I joined it. But is it "underutilized" by the city? I thinks it probably is "utilized" exactly how the city wants it utilized... To create the illusion of due process and citizen input while maintaining the status quo.

Regarding Portland. I sense that bike activists in PDX are not content with being a national leader anymore and now measure progress against standards set by Copenhagen. I know PBOT officials are of that mindset. Perhaps they have been humbled a bit by the strides that NYC and Chicago have made as well.

I guess my point is that Portland is on an entirely different playing field on bike planning and urban development issues. They are playing for the World Cup while Salem is playing in an after school league at the Y. The Germanies of the world are not content if they don't make the World Cup final. While other teams are triumphant if they can just score one goal.