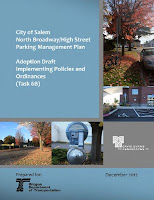 Did you forget about the North Broadway Parking Study? Yeah, me too. It's been almost two years since the draft recommendations came out, and it seemed like they languished for a while. Officially, since it represented policy change, it was put on hold during the "clean-up" of the Unified Development Code.

Now that the UDC project is turning to the policy changes, the parking study is back and at Planning Commission on Tuesday.


The plan looks evolutionary and incremental, and is not a game-changer. It doesn't lead on making the district a walker's paradise. Instead, it is a modest retreat on the norms of Salem's auto-dependent and auto-centric development styles.

It's important to note that it's also a response to the fact that our current parking minimums are too big here (and in general), and with the over-supply of parking, developers and owners are seeking many variances to reduce the required minimums. This is market-driven, not city- or planner-driven - though of course it is also consistent with higher-level goals to reduce off-street parking supply.


Also on the agenda is proposal to delete a sidewalk out at an apartment complex on Cordon Road briefly discussed here as an inappropriate and utterly car-dependent site, as well as what looks like a house-keeping matter on zoning for the Minto Bridge. Apparently the Boise and Audubon parcels still have "industrial" and "agricultural" zoning and need instead to have a "parks" zoning - or, "public amusement" in the official lingo.

SCAN to Deliberate Next Steps on Howard Hall

Agenda items six, seven, and eight are all about the Blind School:
SCAN says "Everyone who is concerned about the future of the former School for the Blind property is welcome to attend the meeting and participate in the discussion."

The North Broadway parking study is just more evidence that city staff and council are not ignorant of the principles of parking management but for some reason they have elected to cast them away for the to meet the short term goals of the hospital. It sure would be nice if we could trust staff to follow policy conistently across the board.