What about that Belluschi Bank, Part II - A New Try at Demolition

In October of last year one was suddenly demolished without any formal notification process.

Talk about the North Campus of the State Hospital has suggested that there's a much stronger appetite to protect Edgar Lazarus' "Dome Building" than Belluschi's Breitenbush Hall or any of the other buildings.

News that Gannett is looking to sell the Statesman-Journal building and relocate the paper's offices puts that building's future in question.

And of course there's the First National Bank downtown, which has survived at least one attempt at demolition.

Nearly half of Belluschi's Salem body of work is in question right now.

Readers have shared that earlier this month, developers filed for an extension of the 2008 demolition permit for the First National Bank Building. 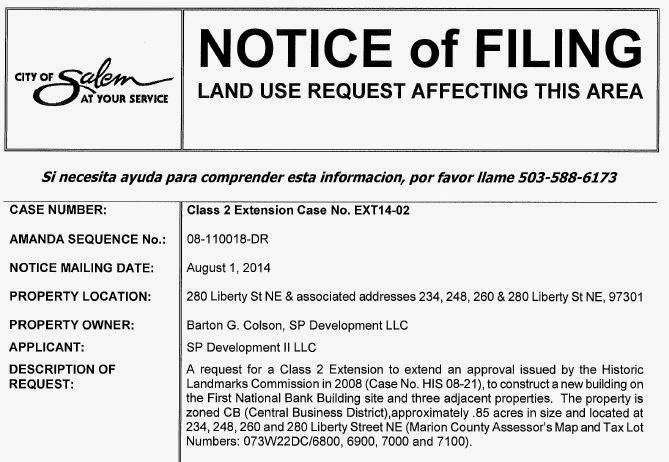 The demolition permit had expired in 2009, but the City's rule on a "Class 2 Extension" is to grant it if "there have been no changes to the standards and criteria used to approve the original application that would require modification of the original approval."

Unaddressed in the notice is whether changes in design would require a reassessment.

The City doesn't have the decisions from before 2009 posted to the Historic Landmarks Commission site, so a good bit here is conjectural and unconfirmed.
Here's the best rendering I have found for the old proposal of a half-block development that would include both the old City Hall site and the Belluschi Bank. It's pretty big.

It would also appear to involve the Arthur Moore Building (on left in above image).

If the propsal has been changed or scaled down, you'd think that would be relevant, and it would be good to know more about the project.

There's a deadline of August 15th to submit comment to the City's Case Manager, Kimberli Fitzgerald. The notice is dated August 1st. Two weeks seems like an awfully compressed period for the demolition of a designated historic resource. This is another example of the way this "heritage all-star" city talks preservation but doesn't walk the talk very well. It's easier to stop vinyl windows than a demolition, and that doesn't seem like the right balance.

It is safe to say:  The Belluschi Bank is in danger.

For context, here's Belluschi's body of work in Salem:

We are, in fact, looking at losing 2/3 of the buildings not at Willamette.

If the clinic had not already been demolished, and if the Statesman plant and Breitenbush Hall weren't also at risk, it might be easier to accept the loss of the bank. I don't happen to think the bank greets the sidewalk in a friendly way, and without windows and with the dark marble, I find it cold and aloof. It doesn't really fit into a walkable, vibrant urban fabric. And I badly want the surface parking lots downtown to be redeveloped with mid-rise, street-car scaled mixed-use buildings.

But in the context of these other losses, actual and probable, there is good reason to resist the demolition. We are losing what is a real body of work, not just a one-off building by a distinguished designer.

We would also be losing the relief sculpture of Frederic Littman, which highlight tradespeople and industry, and look back to WPA-era celebration of workers. It is a rare combination of architect and artist in Salem, especially on a commercial building, and we should not lightly eliminate it.

Just in the past year or so we have seen real arguments for using the building: A year-round market, the Social Security Offices, a downtown branch Library. A creative project should be able to find an adaptive reuse for such a great downtown corner site. And if necessary, as with the way the cremains memorial was significantly altered, we should accept alteration of part of the building if that enabled its retention. Willamette's changes to our Carnegie Library and at Smullin Hall might also be an example. Additions can be configured above and behind the most significant facade elements.

(For more on the Salem buildings of Pietro Belluschi, see posts here.)

The City approved both the extension on the demolition approval and the extension of the new building approval (though it's not clear how much of a design review this was).
Posted by Salem Breakfast on Bikes at 12:01 PM

This is a shame. Appreciation of historic architecture changes generation to generation.

In the 1960's the City tore down our old city hall, Marion County destroyed out old Courthouse downtown. Today I think most people would agree that those buildings would have been a great asset to our Downtown Historic District.

Just because the current generation doesn't value the 1st National Bank Building architecture doesn't mean it should be torn down. Future generations may love this building more than any other.

Why do we have city staff hired to perserve our historic buildings if all they do is sign demolotion permits to destroy them (Howard Hall, State Hospital, 1st National Bank). Seems a waste of money.

There's a saying that "the greenest building is the one that's already built." A 2011 report from The Preservation Green Lab at the National Trust for Historic Preservation shows that with some exceptions and caveats about how retrofits are carried out, that is very largely true.

Updated with City's decision to authorize extensions on both the demolition and new construction.