Who the heck is going to Council?! Even with an early start time of 5pm crowds are gonna be thin.

You might have heard there's a popular sporting and entertainment event Monday night, complete with a gubernatorial bet involving a Total Domination IPA from a large Eugene Brewery.

You don't have to love the sport to enjoy the festival and spectacle.

Ah, but the alcohol.

A note about drinking and driving - but maybe we need also to talk more about the way we have a monoculture of autoism that makes it difficult not just to get home after you've clearly had too many, but also makes it problematic if you've just had a pleasant amount with dinner at a restaurant or with friends. Impairment comes at low levels and blowing .08 isn't actually all that difficult. At the threshold levels you won't swerve and weave dramatically, but your reaction time is just slowed enough that if something bad happens while you are driving, the odds of catastrophe are magnified - and you will meet the legal threshold for a DUI.

Having robust transit and bike networks makes it easier to for people to choose less risky travel tools - and to have reasonable fun in the process. It doesn't help the incorrigible ones with deep problems, but it does help ordinary social drinkers.

Aside from the new crop of Councilors, and our detour on the big party, only one minor note of interest here.

There's a dedication of public rights-of-way at the Blind School, and it's interesting to see the strip on Church Street. Why? If anything, Church Street here should be narrowed for cars, with more space devoted to non-auto travel. So why is the City grabbing ROW here?

Mission obviously needs to be configured for bike lanes, so that part is no mystery.

Not at all on Council agenda, but relevant here, the Hospital's propaganda machine is trying to rebrand the project as "the Church Street Property." They have a new website. The new name should be resisted! We should continue to call it "the Blind School property" at least until the debate, controversy, and legal maneuvering is done. And maybe still afterwards. Once Howard Hall is gone, retaining the name will be an important way of remembering history. Calling it the "Church Street Property" erases that history - like airbrushing and photoshopping people out of photographs - or gratuitously cutting down old trees.

Here are some notes on the latest site plan posted at the Hospital's site:
It's just a rotten plan, that's all. There's plenty of room both to build new stuff and to save old stuff. This plan is practically the minimum on both counts! Just look at the yellow.

Since there's a light Council agenda, let's talk about transportation funding and the Legislature. 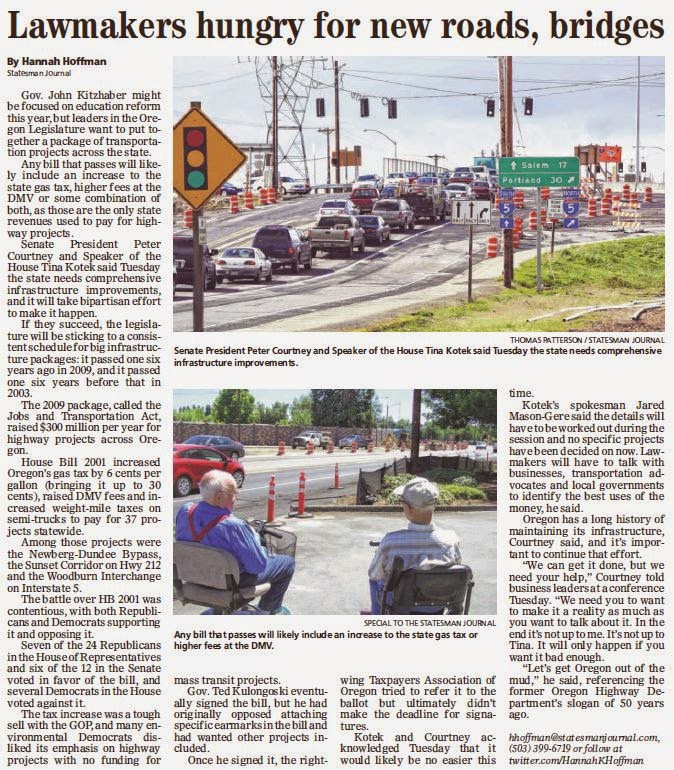 Friday there was a note about jockeying for a big transportation package in this year's session. The headline said "new roads, bridges," but there wasn't enough talk about maintenance vs. new.

Over at a new periodical and think tank on cities, City Observatory, economist and critic of the CRC Joe Cortright has a number of wise things to say about transportation funding. He says
Check out the full article. It looks like it might be narrowly focused on Portland, but it applies to our "streetlight utility fee" as well as the State and to ways we should be thinking about things we need more than a Third Bridge in our next local transportation funding packages.

That's like a revenue-neutral carbon tax, but just on gas. You pay more at the pump, get a rebate on a different tax related to employment. It generally enacts the idea of taxing what we want less of, and reducing taxes on what we want more of. I can't comment on the FICA side of Krauthammer's specific proposal, but in general terms proposals like these deserve very serious consideration.
Posted by Salem Breakfast on Bikes at 11:00 AM

Can you tell us how the Cortright article applies to the proposed streetlight fee? I don't get it.

In at least in two broad ways it applies: To the extent that streetlighting is part of the transportation system, the general points about funding the transportation system seem relevant (some more than others, of course). Also, in the last iteration of the fee, as i understand it there was a component that was going specifically to street maintenance.

The City's own slide deck called it "Proposed Options for Funding Streetlights and Neighborhood Street Maintenance." The charts were all about the gas tax and transportation revenue.

Your question is a bit baffling, so maybe you're coming at it from a totally different angle? I'm sorry for the confusion.

Added Krauthammer column on gas tax this morning - might circle back to it once the State and US Legislatures get going on transportation funding again.

SBOB, there is a new proposal for a streetlight fee. It was presented by a City staffer at my neighborhood association meeting in December. It is no longer for street maintenance, just streetlights, but it frees up state gas tax money that the city gets so that it could be used for street maintenance. The fee would be billed with our water bills. It still has the same problem as the last proposal of being very regressive. For example, the rates for all single family residential properties are the same ($2.80 a month) and the rate for all commercial buildings of any size are less than 5 times that ($13.50 a month).

Has the City published a document with the details? I haven't seen one yet, so your details were new, though I had heard that the City was going around talking to folks again.

But I don't see how a change in the proposal alters how the Cortright bit does or does not apply.

Here's a quote in the Cortright piece - "We ought to structure our user fee system to encourage...car-free modes of transportation, and provide a financial reward to those who drive less. The problem with a flat-household fee or an income tax is it provides no incentive for people to change their behavior in a way that creates benefits for everyone."

He also says "But for something like transportation (as with water rates, sewer rates, or parking meter charges), fairness is best achieved by tying the cost to the amount of use, or what economists call the “benefit principle.” Charges tied to use are fair for two important reasons: higher income people tend to use (in this case, drive) more than others, and therefore will end up paying more. Also, charges tied to use enable people to lower the amount they pay by changing their behavior."

That's the progressive structure you're looking for, isn't it?

Anyway, it seemed like there was lots in the Cortright piece that was relevant to Salem's streetlight fee concepts.

The major complaint to the streetlight fee - as discussed at our December SCAN meeting - seemed to be that businesses were not paying a large enough share. But before I could agree with that conclusion, I'd like to understand what our streetlights are for. Are they for the roads, so that people can drive places at night? Or are they for pedestrians, so that they can travel at night?

Last time I checked, cars have headlights and don't need streetlights to get somewhere in the dark. And stores that are open at night tend to solve their own lighting needs. People want to be outraged that Walmart, Home Depot, Lancaster Mall, and other large businesses aren't being asked to pay more, but why should they? Just because they can? It seems to me like those businesses don't benefit much from streetlights. I would argue that those businesses should be paying much more in system development charges since those businesses depend on their customers travelling by car. And those SDSs should be a lot larger than any amount of money brought in by a street light fee!

I'm certainly not going to solve this issue in the comments section here, but we as a city should step back and try to describe the benefit that streetlights provide, and then describe who benefits. Just suggesting that businesses pay more because they can might be progressive, but I'm not sure it is fair.

The working theory is probably here in the SCI Report linked to at the city's streetlight page. It says:

"Salem’s streetlights represent a pure public good, from which all residents and businesses derive indistinguishable utility."

"According to economic theory, streetlighting is a pure public good. The use of a streetlight by one individual does not preclude another’s use (it is non-rival), nor is it possible to limit the benefits to only those individuals who have paid for them (it is non-excludable) When individuals cannot be prevented from enjoying the benefits of a good, there is little incentive for private provision. Consequently, the provision of streetlighting falls within the scope of city government."

At any rate, the theory here does not draw a strong connection between road users and street lighting.