The State Historic Preservation Office has posted the nomination form for the house and garden (and tool shed!) of Elizabeth Lord and Edith Schryver. The complex was approved for an individual listing on the National Register of Historic Places, so that's a neat thing to celebrate. (The "recently listed" page scrolls for about six months or so, and soon it will fall below the fold.)

In the nomination are a number of interesting details, but one stood out here. In an early plan view of the property, you can see the little cut-out that remains today at Mission and High (lower left).

The tree canopy conceals the corner on the satellite view, but there are several other "bites" scattered around town. Here's a full set of four at Cottage and Union (also the location of the venerable honeysuckle).

Looking at High and Mission, you might think the "bite" was merely a product of plat jog and the need to align streets that didn't actually line up. But the strict rectilinearity of the grid at Union and Cottage shows that plat jog is not the cause of them.


Conversation with City Engineering staff a few years back during the Vision 2020 project suggested that the reason for these "bites" has been lost down the memory hole! Nobody seemed to know why they were done.

Nowadays, at intersections we are installing "bulb-outs," extensions to the curb that shorten the crossing distance for people on foot and to narrow the travel lane for cars and to calm speeds a bit.

At least in form, since we don't yet know anything about function, these older "bites" look to be the opposite, enlarging the crossing distance and travel lane. Were they an early right-hand turn lane? Do you know?

So that's a data point.

Hopefully at some time we'll find an article about the fashion and the engineering reasons behind it.

You may not be fascinated by this, and there are other things of course in the nomination.

Since streets and buildings rather than gardens are the thing here, it was interesting to see a high-level, general assessment of the gardens. It has been a question just how important Lord and Schryver really were. Their East Coast pedigree was always front and center, and it seemed like their fans wanted to be able to find some kind of national significance for them. Was there a bit of provincial rah-rah and boosterism going on here?

The nomination gives an answer.

In the summary of significance, the nomination writers argue that Lord and Schryver have "statewide" significance for women's history in Oregon, but only "local" significance for the landscape architecture. Their gardens are not, after all, nationally significant. One garden expert suggests the personal "home garden" might be unique on the West Coast, but that opinion rests on narrow details of connoisseurship rather than broad details significant to a wider audience. In general terms they were not influential outside of our region.

What about the public spaces? An interesting tension in their work is that while they sought out relatively wealthy clients for private gardens, and started indeed during the Depression, they also worked on parks and public space. It would be interesting to learn more about their parks work. The two that come to mind started as private gardens for well-to-do Salemites: Deepwood and Bush Park. Even with native plantings, the model behind the formal garden with its walls and fortifications rarely yields an inviting public space. The garden at Deepwood works for ritual, chiefly for weddings, but not so much for strolling; moreover, spatially it doesn't relate to anything beyond the property itself. The rose garden at Bush works similarly. But did Lord and Schryver work on less formal spaces that from the beginning were meant as public park space?

Finally, perhaps the most interesting tension of all. There remains a strange silence on the matter of their relationship.  Others have written on this, but it interesting to note here that what is surely a love story in addition to being a business story is mainly ignored.

How is it possible to see the effort and the flowering of the home garden and shared home as anything but a testament to and expression of love in an unrecognized marriage? It can't be just a professional partnership, right?

But on this account, Lord and Schryver were "single women."

And Schryver is described dryly only as the "life-long friend" of Lord's. 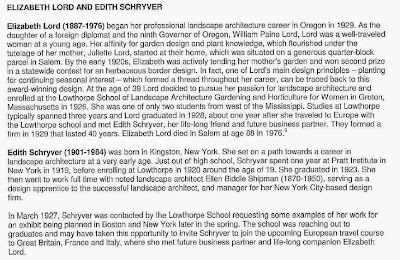 Schryver is not buried with Lord, and something's not right about the seeming erasure of their relationship. Hopefully a forthcoming book-length study or biography will shed some light on this. As much as it might be a private and personal story, it is also a story about Salem and about "social history" and "women's history." Elizabeth was the daughter of a governor and prominent jurist, after all. How did they negotiate all this?

All in all, the nomination may yield more questions than answers! Hopefully it will lay the groundwork for more research and inquiry.
Posted by Salem Breakfast on Bikes at 10:00 AM

Email ThisBlogThis!Share to TwitterShare to FacebookShare to Pinterest
Labels: Lord and Schryver