Did you see the opinion piece yesterday about "free range kids"? 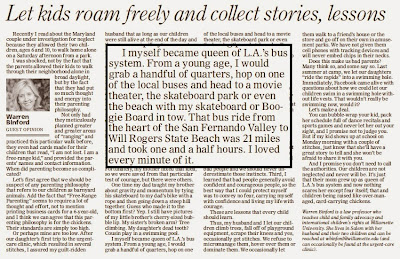 I wonder, though, if it might have been pitched too much in the direction of exceptional people rather than ordinary people. That is to say, does the decision for free-range kids require too much of an individual, even seemingly heroic, gesture?

Not in the way of "when we were young we used to walk uphill in the snow barefoot for 20 miles both ways" type tales.

But Warren Binford's appeal to her own conditions and adventures in childhood suggests she and her family may have been exceptional, an outlier. A 21 mile solo ride to the beach is a terrific anecdote - but also a non-trivial feat!

And so I wondered if the piece still stressed too much the individual decisions of parents and kids to go against prevailing norms, and maybe didn't give enough attention to the way the built environment actively makes it more difficult for parents to give their kids more slack in transportation and play, to swim against the current. In addition to the act of will by parents and children, there is the matter of context in infrastructure.

Instead of making "free-range" the easy decision, our built environment makes it the difficult decision. We have a larger, interlocking set of policy decisions, ones local, state, and federal, that implicitly makes things difficult.

A commentator on the piece writes:


People are afraid to let their kids outdoors. Our neighborhoods are void of children playing in their yards, soccer on their streets, or racing each other on bikes around the block.

In addition to the cultural fears around "stranger danger" is the fact that we have systematically engineered a huge amount of public space for cars rather than for kids or any other people.

It is too often bad on our neighborhood streets.

Hydraulic autoism is inherently inimical and potentially fatal to children; with traffic calming measures we end up having to retrofit neighborhood streets that should welcome the basketballs, footballs, soccer balls, skateboards and bikes. (And, you know, other things too. Maybe this list skews with a gendered bias? Is play in the streets slanted towards boys? But that's a whole 'nother topic!)

It's also bad on our vast arterial stroads.

And in our school siting and facilities decisions, we give too little thought to walking and biking and all too much thought to car and bus.


Still, it was interesting that Binford's examples came from not in a mid-rise compact urban environment or a small-town environment, but from that vast Exemplar of Sprawl, Los Angeles.

She talks about ranging widely in an earlier version of the very same sprawl and autoist transportation system we critique here today.

What she doesn't address is that LA already had made it more difficult for her, her family, and others like her.

And our current approaches will make families like hers more and more of an outlier.

In addition to the individual decisions that each parent and family must make, there are also system decisions that collectively we have made, and continue to re-ratify, that make the individual decision much more difficult than it should be. As long as we continue on this trend, families that opt for a freer-range approach will remain fewer and more isolated, and as a cultural phenomenon free-range kids won't scale up to meaningful numbers.
Posted by Salem Breakfast on Bikes at 12:01 PM

This is a great post! I was surprised by the fact that you did not note that the greatest threat to children's safety (as measured by death and major injuries) is actually motor vehicles. Thus, if our society is really concerned about child safety, we should be reducing children's exposure to and interactions with motor vehicles and creating more livable, car-free, walking neighborhoods.

You are right! (As it is a subtext for the whole blog, it may be something we don't say as often as we should. Thanks for the reminder.)

Here are some previous notes on just this topic.

Wonderful! Thanks for keeping us well-informed so that we can make educated, conscious decisions about the communities we create by the space we design.