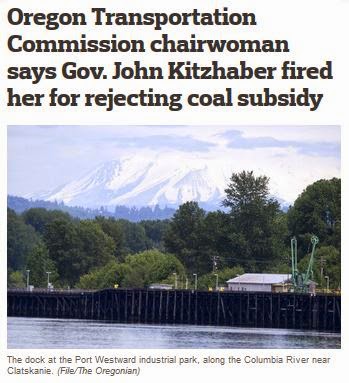 Holy Smokes! If you thought there was a chance that the Oregon Transportation Commission was empowered to exercise independent judgement, think again.

The Oregonian reported yesterday that Governor Kitzhaber has fired the Chair of the Oregon Transportation Commission because she voted against a coal terminal project.


Catherine Mater, a Corvallis civil engineer appointed just last summer by Kitzhaber, told The Oregonian/Oregonlive on Monday that the governor pressured her to approve a $2 million subsidy.

She was the deciding vote in a 3-2 commission motion in August that doomed the grant that would've benefited Ambre Energy, the company proposing to annually export 8.8 million tons of coal through Oregon.

Kitzhaber's action is puzzling because of his outspoken opposition to coal exports. His office didn't immediately respond to a request for comment....

She penned an opinion piece for The Oregonian/Oregonlive Jan. 3, arguing that the state should discriminate against coal and oil projects in awarding transportation grants.

Mater said Kitzhaber's chief of staff, Mike Bonetto, called Friday and said she needed to step down immediately. Mater said she was drafting her resignation letter.

Mater recalled Bonetto saying: "We have a situation that has escalated. We need to accelerate your removal."

Her forced removal clears the way for the grant to be approved when the commission meets again in February and sends a clear message from Kitzhaber to members of the Oregon Transportation Commission to fall in line.

Guess again! The OTC meets on Thursday and they will reconsider some ConnectOregon funding. It looks like the coal terminal project is going to slide back in. (See below for an update on ConnectOregon.)

And on that note of checks and balances, and of intellectual honesty and independence, the Legislature kicked things off yesterday, and it was interesting to see this:

So maybe this is a sign that the Legislature is in fact going to be serious about seismic issues.

It would be great if quake and carbon got serious policy action this year. (Though the OTC power play suggests just the opposite, alas.)

And it seems like bike stuff as natural, cheap, and easy implementation of low-carbon and quake-preparedness policy is a better way for things to happen than local earmarks or set-asides. If we get serious about carbon, it will not be difficult to find money for bikes, but otherwise freight's gonna resent things like expanding the Bike Bill to go from 1% to 2% of gas tax funds for people walk and bike.

It's also important for the Legislature to embrace "fix and maintain" over "build shiny new things."

In years past we've posted weekly updates, but that has yielded a lot of copy-and-paste from week to week.  The sausage-making is also kinda tedious. So we'll probably let the news rather than the calendar drive updates this season. (And it's possible we'll lose interest entirely if real action on meaningful things looks increasingly unlikely.)

This is a partial list of bills filed before the session started:
Lots of carbon things:
No seismic reinforcements for bridges yet. The Connect Oregon change looked like renaming the general program, not an appropriation for the next round.

This is very preliminary and far from exhaustive. We may come back and silently update the post as other bills come to light.

Here's more on the OTC and ConnectOregon V program:

See note at the bottom of this post for the final project rankings last summer. The transit center was #50 out of 104 projects, the top area ranking.

The first recommended alternate to slide in for the additional funding is the "Port of St. Helens, Berth 2 Dock Reconstruction." This is the Ambre coal transloading project. In the letter of recommendation, there is no language about "coal," "health," or "carbon."

Notes on the whole ConnectOregon V program are here.
Posted by Salem Breakfast on Bikes at 12:01 PM

updated with more on the OTC meeting, ConnectOregon V, and the Ambre coal project re-recommended for funding.

Here's more from the O for you -
http://www.oregonlive.com/environment/index.ssf/2015/01/top_transportation_leader_fire.html

"In a statement, Kitzhaber spokeswoman Melissa Navas indicated that contrary to Mater's view, the governor's concern was about the process, not the coal project. Normally, the Oregon Transportation Commission approves without question the list of projects assembled by ODOT stakeholders, regional officials and staff."

Previously there had been a "public hearing," and there's going to be another "public hearing" on the new projects at 12:45 in the meeting, but this seems like a straight-forward expression that "public hearing" = public participation theater, and we're all just dupes along for the ride. This is kinda icky.

According to an Oregonian piece, today she returned to the OTC as an ordinary citizen and gave comment during the "public hearing":

"On Thursday, with the grant project she rejected coming back to the commission for approval, Mater addressed her former colleagues, telling them again that the project should not be funded. With Mater out of the way, the grant to repair a World War II-era dock at the Port of St. Helens appears likely to be approved next month.

Mater accused the port of being untruthful in its application seeking a subsidy to help Ambre, saying it failed to note significant unresolved state permitting hurdles."

"Mater's activism threatened to stoke discontent among key lawmakers when the Kitzhaber administration is seeking money from the Legislature to address what the Oregon Department of Transportation calls a $5.1 billion backlog in seismic upgrades and other projects. Last week, Oregon legislative leaders and business groups expressed support for increasing vehicle taxes to fund ODOT's wish list."

The new Chair, Tammy Baney, has a public health background and leap-frogged the vice-Chair David Lohman, who had also voted against the coal project.

In the newspaper today, Dick Hughes points out that the numerically adjacent bill, SB 176, also introduced by Senator Boquist would prohibit courts from applying Sharia law.

Both bills were introduced at the request of the same constituent.