Bike Boulevards at the Neighborhood Associations, Other Newsbits

The Bike Boulevard folks are making the rounds. If they're visiting your neighborhood, make sure to show your support! 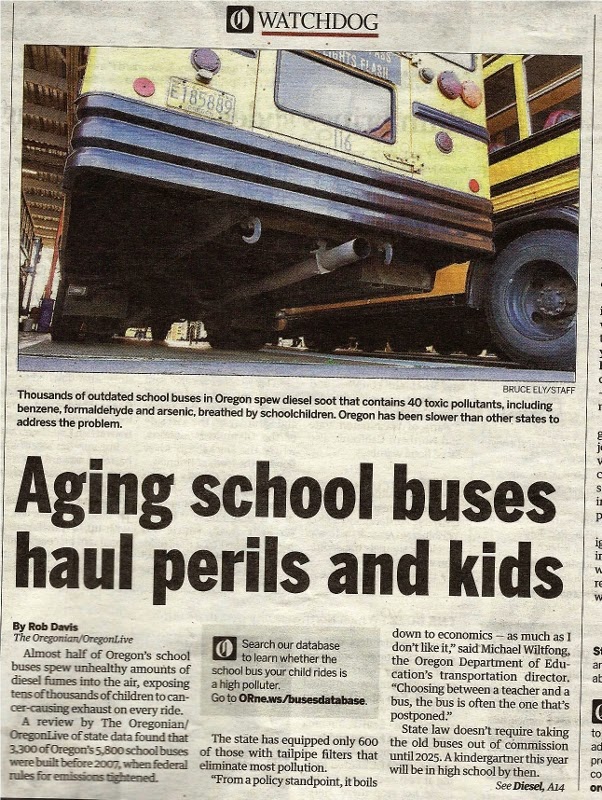 Need another reason to support better ways to walk and bike? The Oregonian found that pollution is a real problem in yellow bus service:

Almost half of Oregon's school buses spew unhealthy amounts of diesel fumes into the air, exposing tens of thousands of children to cancer-causing exhaust every day.

An Oregonian/OregonLive review of state data found that 3,300 of the state's 5,800 school buses were built before 2007 when federal rules for emissions tightened.

The state has equipped just 600 of those with tailpipe filters that eliminate most pollution....

Salem-Keizer School District's 100 pre-2007 diesel buses are the most for any Oregon district. It plans to replace the 62 oldest by the next school year as it resumes bus replacements halted during the recession.

In the meantime, drivers and mechanics walking through Salem-Keizer's main bus yard must contend with clouds of soot pouring out of buses like No. 144 that leave on routes each morning and afternoon.

Bus 144 was manufactured in March 1996, long before emissions standards improved. It will be retired at the end of the school year. While it's relegated to a shorter route because of its age, Bus 144 still travels 40 miles every day, transporting 77 children of all ages, from kindergartners through high school.

That's left students heading to North Salem High, Parrish Middle and Highland Elementary contending against a known carcinogen that slips in the windows.

Yellow bus service also duplicates regular transit like Cherriots and represents monies that might better be spent on comprehensive youth bus passes and improving conditions for more healthy activities like walking and biking to school.

The Minto Brown Island Park Master Plan project also has a new survey out, and one important question in it centers on user conflicts between people on bike and people on foot.

I'm not sure there's a clear answer - people on bike too often do go too fast or are otherwise careless and impolite, and people on foot also have long leashes or spread out clear across the path. Hopefully there will be thoughtful responses from both sides and maybe the "wisdom of the crowd" will land on a strong set of recommendations and partial solutions for better sharing.

For that question alone the survey is worth taking. In March there will also be some meetings.
Posted by Salem Breakfast on Bikes at 7:00 AM

I went to the bike Boulevards Facebook page and asked them to come to Keizer. So far I've not heard back. But why not build a unified network between the cities?