Transportation in Council Goals and Grant Neighborhood this Week

Tomorrow night, Monday the 2nd, Council meets in a "work session" to start conversations about updating the "Council Goals" document, which are the high-level policy goals and focus areas for the city each year.

The editorializing checks indicate not whether they are finished or incomplete, but rather whether they are good or bad policy goals from our perspective here. (Yeah, it's kinda like grading on a pass/fail scale!)

We lead with the continued folly of the Third Bridge:

Fortunately, the Downtown Mobility Study is also there, and if you need something positive to mention to balance criticism on the Third Bridge, suggest Council move more assertively on implementing the recommendations from that study. Right now things are sluggish, and implementation could use a jolt of energy and interest!

Despite the overheated rhetoric about parking, ending subsidies from the Urban Renewal District for the downtown parking garages is necessary, and this continues to be an important project for downtown health. Free parking everywhere all the time is going to harm, not help, downtown.

We need to knit Riverfront Park with downtown much better. Front Street and the RR make it too difficult to reach the park from downtown, so creating easy back-and-forth connections that are safe and inviting for families, kids, and the elderly will do a lot for downtown health.

Next year the State Street study will kick off the public phase, but the minutes to the last NEN meeting (see below for more) indicate Councilors are already engaged and working on it!

Much more so than the "middle Commercial" study, the State Street study really shimmers with possibility. Meaningful parts of the old streetcar scaled bones of State Street remain, and a 21st century transformation would contain elements of reversion. It's a chance to combine the best of the old and new in truly exciting ways.

Collectively we should really seize this opportunity and write a plan with verve and vision, and serious intent to implement.

You should also read the rest of Council Goals because at least in theory that sets the agenda for the whole year. That's the vision for Council and staff.

And even though there is some nonsense in it, mostly it has good things - there are more green checks than red x's, you'll note.

Council needs to hear not just about the folly (see here and here), but also needs reinforcement to push harder on some of those other beneficial projects - like better facilities for people on foot and on bike and for the especially young and old! (After all, building human capacity this way is a whole lot cheaper than building new auto capacity.)

The goal session will not have an opportunity for public comment, so an email to Council is the best way to comment. The session will be in the Anderson Rooms in the Library at 5:30pm on Monday the 2nd. The Library is closed on Monday, do note, so if you go to observe you'll need to enter at the plaza level rather than the main entry.

The Northeast Neighbors neighborhood association meets on Tuesday the 3rd, and while the agenda doesn't have anything new of particular note, the minutes from the last meeting touched on Council Goals. One neighbor


brought up pedestrian safety on Market Street. With transit service ending on D Street, more riders will be using bus stops on Market, which has very few pedestrian crossings.

That's an excellent point! The Crosslands, in fact, were killed on a Market Street sidewalk earlier this month, and improving the walking environment in all ways on Market Street is a worthy goal - maybe something even for Council Goals.

NEN meets Tuesday the 3rd, at 6:30pm in the Salem First Church of the Nazarene, 1550 Market Street NE.

Grant to Vote on Support for Bike Boulevard Concept

The conversation is worth quoting in full (click to enlarge): 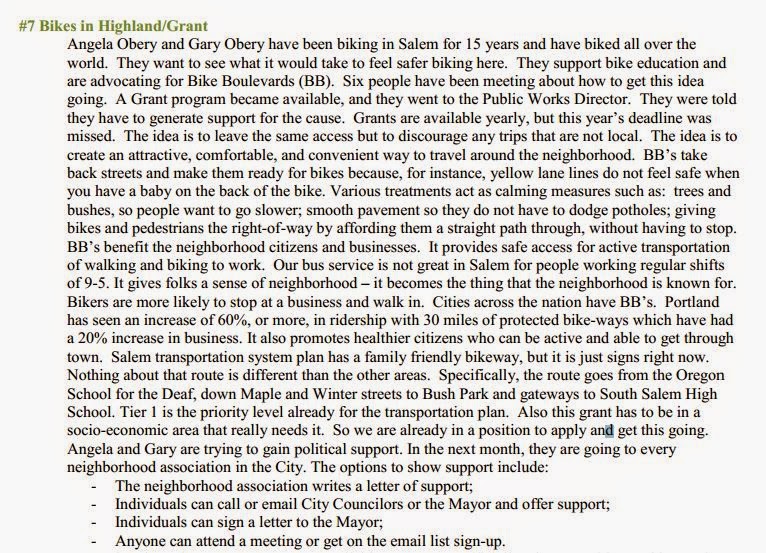 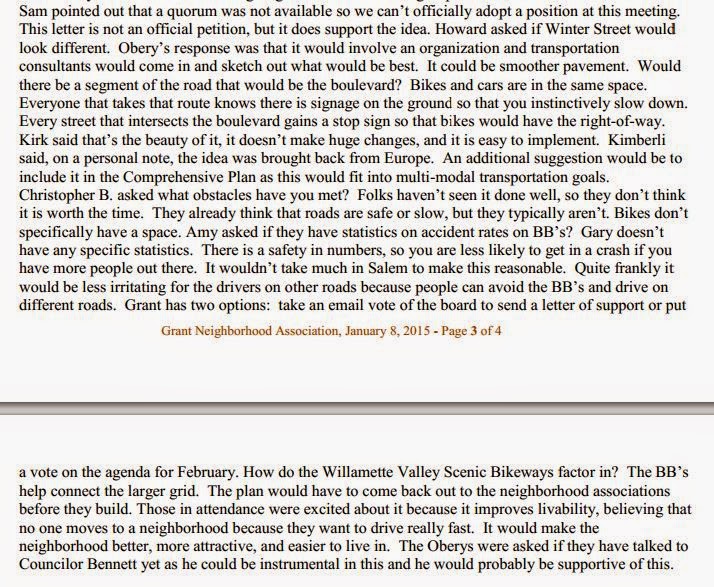 
Those in attendance were excited about it because it improves livability, believing that no one moves to a neighborhood because they want to drive really fast. It would make the neighborhood better, more attractive, and easier to live in.

Yeah: No one moves to a neighborhood because they want to drive really fast.

On the agenda this week is the question whether formally to endorse a bike boulevard concept.

There are also notes on the draft Version of "Historic Houses of the Grant Neighborhood," a guide to the house types that is in progress.

Look for the final version later this spring!

At the meeting there may be additional discussion about the project and pamphlet.

The Grant Neighborhood Association meeting is on Thursday the 5th at 6:15 p.m. in the Library of Grant Community School, 725 Market St NE.

And the Bike Boulevard Advocates will be talking at a couple of other neighborhood associations this week.

If you're in the Faye Wright or East Lancaster Neighborhood Association areas, you can support bikes in person!
Posted by Salem Breakfast on Bikes at 7:00 PM

I am really puzzled about why Market Street near Hwthorne seems so dark and hard to see. It is supposedly well lit, but for some reason whenever I drive through there at night, I can't see the lanes and get really confused with no being able to see well. When it rains it is even more difficult. I wonder if it is something to do with the dark pavement, lights are too high, or the slope of the street. This area needs some engineering to make it safer. Definitly the street has too many lanes in that area.

Turns out that tonight's work session is not what we thought it would be from the description on the City website. Our new Councilor Tom Andersen reports ... "Yesterday I learned that the council meeting is not a goal setting session but a team building session with a professor from Willamette. The official reason for labeling it a goal setting session is 'We failed to correct the title on the Council agenda and this is the source from which the master planning calendar was pulled.'" So the real action is going to happen on February 18th. I hope we get a good turnout of active citizens to observe. BTW, these are two-year goals and not one-year goals as your post indicates.