Why so much Acceptance for Traffic Cone Theory of Walking?

A little over week ago you might have seen a follow-up piece on the people killed while walking. One of the reporters recounted a tale of an incoming high school frosh killed by a driver going 35mph. 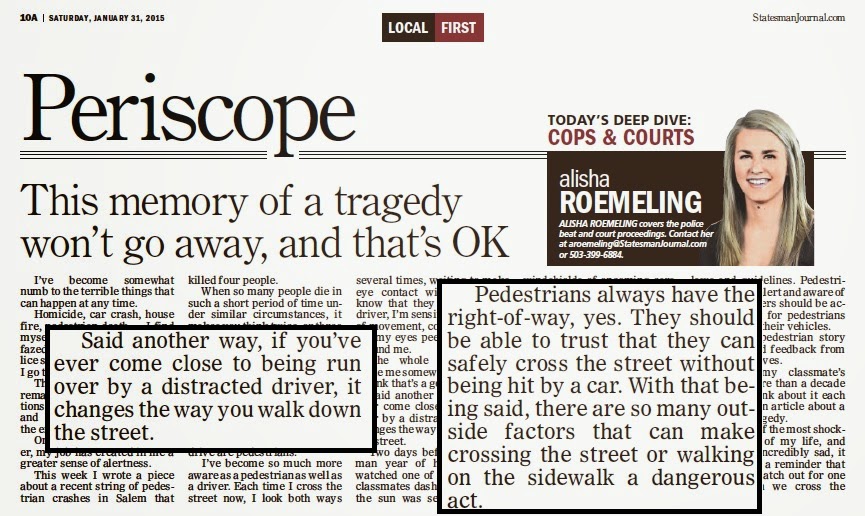 What is sad is the way that walking is made the problematic, hazardous activity, and driving the normal, unproblematic, safe one.

Too much of a predator-prey dynamic is encoded in our conversations. Instead of fueling outrage over carnage, they become a cautionary tale and spur more defensive walking. The person on foot must adapt, not drivers. This is the usual pattern. Focus shifts down to individuals and their decisions, and not up to systems, their biases, and the tendencies and probabilities they promote.

The Salem Police have a new PSA out on driving and walking, and it shares the basic pattern. It never addresses speed of drivers and, trying to be even-handed, it implicitly asserts a questionable equality in the balance of power between people in cars and people on foot.

In fairness to the Police, their primary job is to enforce the laws we have, not to advocate for a legal environment and engineering standards we don't yet have; in this regard the PSA reflects our prevailing norms.

The Oregonian has an interesting piece on drug-sniffing dogs and marijuana legalization. Some police agencies are phasing out dogs that scent marijuana, others are keeping them:


"This is a conversation every agency with a drug detection dog is having or has had for several months now and how it's being addressed varies from agency to agency," said Springfield Officer Daren Kendrick. "But police work is like the ocean, we have to go with the flow and always be able to adapt to changing technologies and laws to help the community."

It's good to remember that police work and our legal system are always in a history, always part of ongoing conversations and changing social norms. What was illegal yesterday is legal today (like alcohol and pot and same-sex marriage), what is legal today becomes tomorrow's scandal or crime (like maybe concussions and football, or carbon pollution and climate change - or driving speeds in urban environments).

But a PSA could also highlight that even for drivers lawfully following posted speeds, at 20 mph a crash is only 5% likely to be fatal, at 30mph it's 40%, and at 40mph it's 80%. Every 5mph of speed makes a huge difference. In our current system, drivers can still make "reasonable" decisions that end up in killing people.

Are these true "accidents" or signs that the system is broken?

The claim here is that the deaths are almost always preventable and are evidence our current system does not work well. Our prevailing norms - legal environment and engineering standards - poorly serve people on foot, and unnecessarily put drivers in positions where they could unintentionally hurt or kill others.

The basic sequence shows a person driving with loud cheezy buttrock and adjusting the radio or volume. Intercut with that is a person walking in dark clothing and attending to a phone.

You know how this turns out.


The primary imbalance is not addressed. The people in cars are the ones here whose vehicles employ potentially lethal force. A person walking does not employ lethal force by the act of walking alone.

Additionally, it seems a little silly to suggest in a residential neighborhood that you need to dress like a traffic cone or Christmas tree in order to check the mail or walk to the grocery store. What about walking to work in the fog? Is this really what we want to say?

A person might choose to do this, of course, but if we are engineering our roads and legal system so that a person on foot must become a walking traffic cone, then the system is completely messed up - at least that is the claim here. Moving towards requiring "responsible" pedestrians to wear pedestrian safety equipment is a move out of the same playbook that criminalized jaywalking.

Moreover, is the advice in the PSA relevant for the deaths to which this PSA responds, the deaths of the Crosslands, who by all accounts were regular and experienced walkers (see, that's crazy, that we are talking about "experienced" walkers as if this was some special skill!) and David McGregor, an elderly man with a cane?

The dead weren't twenty-somethings obliviously reading their smart phones. There's something of a straw man argument here. The person on foot in the PSA should be our most vulnerable, a child or the elderly.

We should have a transportation system, including the legal environment and engineering standards, that allows people of all ages to walk normally and routinely without needing to invest in special pedestrian safety equipment or to become "expert" walkers.

The PSA is not totally off-base, but it still places too much blame on the person walking and does not look closely enough at the driver's responsibilities and the ways our system is biased for drivers and accepts as lawful, driving that too often is actually dangerous.

Posted by Salem Breakfast on Bikes at 7:00 PM

I wrote the S-J journalist describing all the things about how our streets and towns are built that makes walking & biking unsafe. While I believe that we have to live in the world as it is and fight for the world we want, which means that for now I light myself like a Christmas tree when I'm riding. But I tried to show her how hostile our cities are to people outside of a car or aren't 18-55, own a car and in perfect health. I even offered her my time to talk or walk around town. I'm waiting to see if she replies.

Even when you arrive by car, Salem's stroads and strip malls are pretty unpleasant places to be. And what about all the cases of drivers crashing into buildings? Are the buildings guilty of not dressing themselves so they are visible to drivers?

"[W]e’ve long since sublimated any outrage over death-by-auto into victim-blaming. Crossing the street has long been criminalized, save for the handful of seconds you get when the “walk” signal appears. Effectively, we’ve lost equal access to the public roadways unless we’re willing and able to foot the hefty bill for a car. Instead, what we have is an infrastructure optimized for private vehicles and a nation of subsidized drivers who balk at the idea of subsidizing any other form of transit, and who react to a parking ticket as though they’ve been crucified."