Now and Then: Oregon Electric Cars in Front of Grand Theater a Century Ago

In the "Weekend" entertainment section today, there's a great picture of Oregon Electric rail cars in front of the Grand Theater!

Today, between the Masonic Building and the Central Stage Terminal and Hotel Building, there's a bunch of surface parking lots, but of course there used to be other buildings there, and you can see one of them, with a nice brick cornice and all, in the old picture. It reads "Simon..." and "Overland," and old maps suggest it was an early car garage, perhaps linked to the Fashion Stables, which had been at the corner site of the Masonic Building. (Will check the Polk directories and update later! - see postscript below)

In the old photo, the Central State Terminal hadn't been built yet, so the picture must date from before 1921. Far on the right you can see old City Hall.

Here's another view of High Street, taken looking the other way. It seems likely it is from the same session, as there are four men, clothed and posed similarly! The same three rail cars, too. Unfortunately the postcard is in half-tone, and its resolution just a bit too coarse for certainty. (But I'm pretty sure!)

Clearly photographing the rail cars with the buildings in the back was a thing, and it would be interesting to learn more about the initial context and usage for these images.

You might have seen the note in the paper the other day about the Hubbard Building and depot for the Oregon Electric line.

The corner of State and High in the sepia postcard image doesn't seem to show the Hubbard Building yet, so these images could be promotional pieces for the forthcoming construction or for the Oregon Electric generally. 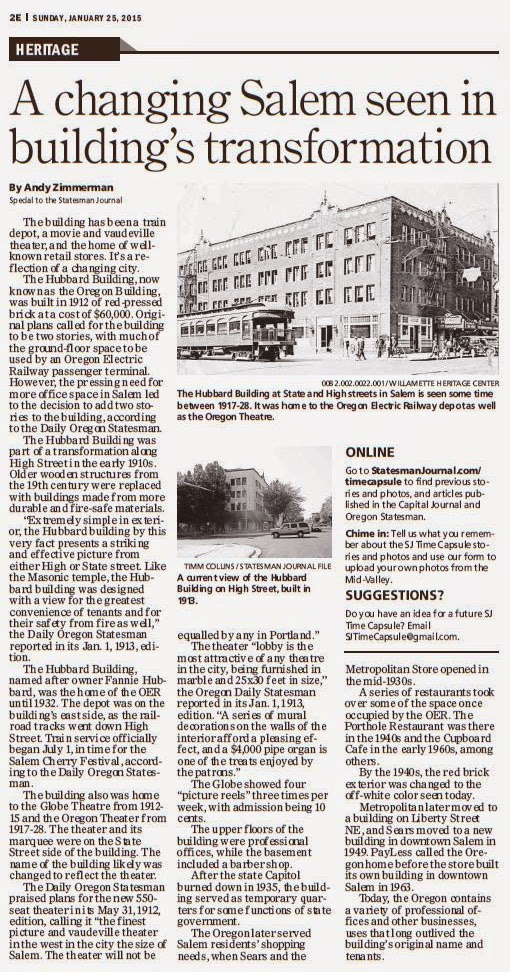 And you might remember that tracks were uncovered during construction in the fall of 2012.

With the ride-hailing software and services out there right now, with semi-autonomous cars very near, and the full robot car seemingly not so far out, we're undergoing another shift in mobility technology, and it is good to have another reminder that our current arrangements aren't very old at all, and may soon be obsolete as well.

The focus here of course is on transportation. But the original context for the image at top was for a show at the World Beat Gallery, "Rails through Salem: A Black History Connection."

There's sure to be lots of interesting and important things in it!

It's the Simonton Motor Company! It was incorporated in November, 1911.