EOA-HNA: Agnostic, even Ignorant on Climate and Carbon?

It looks like the City's released a draft version of the final report for the Jobs and Housing project - formally called the "Economic Opportunities Analysis and Housing Needs Analysis" or EOA-HNA.
But if you read it, there's one glaring, giant omission.

Words like "carbon," "greenhouse"/"green house," and "climate" are nowhere to be found. A text search doesn't turn up a single instance of these words.

This is a document that


is a key part of the City’s planning efforts to accommodate population and employment growth over the 2015 to 2035 period.

Consistently, though, the whole process has been guided by 20th century assumptions on growth and carbon emissions. In fact, there has been a deliberate effort to bracket carbon and climate change as "potential impacts" of uncertain consequence and limited relevance. It's relegated to a footnote in an appendix, basically.


That means we won't assess new development in terms of carbon impact or carbon footprint. 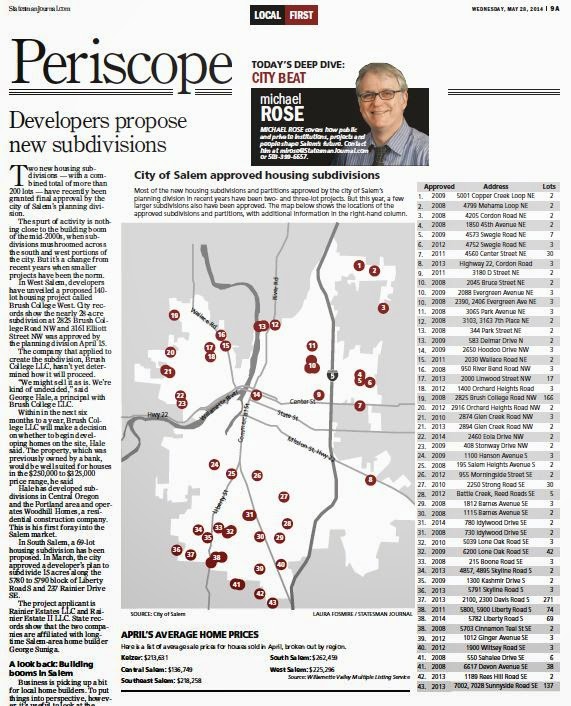 This is timid, largely incremental, planning and is not a serious consideration of what things will need to be like in 2035. For that vision we are still waiting.


It's nice to see more thought given to West Salem, but it's still very auto-centric:


Establish one or more neighborhood or convenience shopping and service centers in West Salem, to provide retail and other services to people living in West Salem.

Not enough attention is given to transportation in 2035 and underscoring the need for especially walkable development.

Until we are willing to look more closely at transportation and land-uses that serve it, which includes our voracious appetite for trip-end storage, aka parking, we will fight over other valuable public and private goods and fail to create the best Salem that we can.

It's true that "transportation" is the lens through which we look at things here, and you might think that this perspective flattens out things and yokes other stories reductively to a master narrative of "cars."

But we wouldn't be arguing over trees at the Blind School if it weren't for this.

Email ThisBlogThis!Share to TwitterShare to FacebookShare to Pinterest
Labels: EOA-HNA

How did Salem get stuck in such a backwards parallel universe?

Here's a link to a more detailed progress report from Portland. They have made some measurable progress. Just the fact that when they make a plan, they actually act on it and actually review their progress toward the goals in the plan seems so radical compared to Salem. It really does get depressing living in such an underachieving city (or is it just a town?).
https://www.portlandoregon.gov/bps/article/393345

Anon - updated with clips from the new 2015 Climate Action Plan. I suspect that transportation advocates still might say it is too aspirational and lacks concrete and actionable policy detail. I'm sure BikePortland and Portland Transport will have comments soon.