Performing our City: There's Something about Salem

A cut of the Chamber's "sizzle" video has been making the rounds. You've probably already seen it. It looks great. Does anyone basically not love it on a first impression? 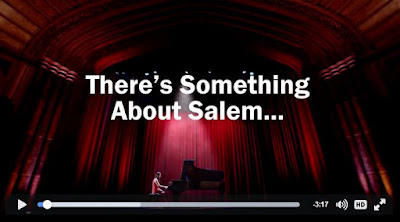 But it's important to remember there is also a sense that it was conceived almost as a substitute for evening and weekend transit. There's a coincidence there that is not so coincidental. Better marketing for Salem, not transit or other substantive improvements, is what the Chamber thinks is important.

The video itself serves up an easy interpretation. As the pianist on the Elsinore's stage suggests, it's a performance. It's an attempt to "change the narrative" with a new script. I read the thing like a dating profile. It's a highly curated performance of one idea of the best of Salem.

So what version of Salem is it performing? 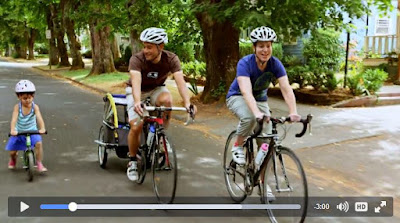 Early in it, OBRA Director Kenji shows up on his bike. That's nice to see.

But that's mostly a throw-away accent detail. There's not a consistent bikey theme - though a bike taxi shows up later.

There's not any transportation theme, in fact. Transportation, the way people actually get to a place, move from place to place, has a shadowy existence in the video. There's a lovely evening shot of the Liberty Parkade and looking west up State Street with the intersection at Liberty - but not much foot traffic or car traffic. The Train Depot gets a drive-by at night from 12th Street. But the Transit Mall as gathering place or bus hub has no meaningful presence and may be totally absent. 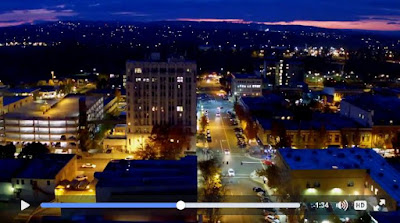 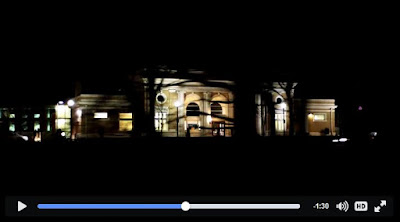 The bulk of it, as I read it, takes place in the interior spaces of businesses. People have already arrived and there's not much urban sidewalk life or motion. Outdoor scenes are at events mainly. There's an implied autoism in all this, in the way people magically are already where they want to be. It's a spaceless city.

It's also about stationary consumption, all about consumer goods and services - and lots of convivial drinking. Most activities have a "price for entry" and, especially if you think of it as a recruiting video, there's an implied level of income. 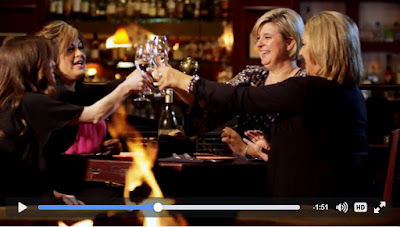 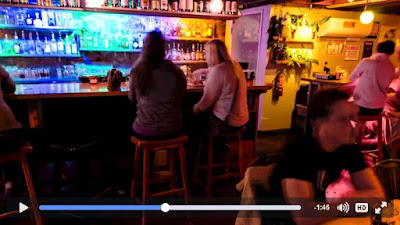 My favorite scene was the free summer movie series at Riverfront Park. I wish there was more of things like that in the video. 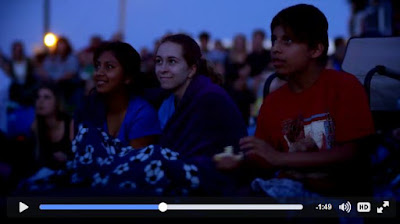 The video almost certainly needs more Latino voices as important as they are to Salem. And while the physical forms on Lancaster Drive are not very attractive, there's a whole bunch of non-anglo entreprenurialism that gets short shrift in the video. Even though the video shows some diversity, it is not very deep or at all structural.

So, you know, it's a dating profile and self-affirmation, not a documentary. Asking for a more representative kind of truth is bringing demands to it from a different genre. Criticizing it in this way engages in some "straw man" argument and isn't all fair play.

But I still wish it were a little more real and had a little less fantasy and sizzle.

And I worry that the effect is narcotic - all that alcohol! - that its real purpose is to lull people into thinking that there's not more to do. "We're ok just the way we are!"

As performance and as artifice, it strips out complexity and ambiguity, serves up one side only of a binary. Nuance is hard, and it is not easy to say "Salem has wonderful, underappreciated charm" and "Salem is terrible in some ways and we have lots of work to do." From here anyway, it's both/and. Both statements are deeply true.

(Though it is possible I suppose that people will have a very different reading and primarily be inspired. It will be interesting to learn if that is the primary effect instead.)

What did you think of it?
Posted by Salem Breakfast on Bikes at 9:00 PM

Overall I thought it was great. Didn't really care for the music though. Needed a shot of Broadway Commons and Saturday Market/Wed Market though!

....also some shots of Salem's farms. One of the best things about Salem is our local farmers and easy access to local food.

I was really unhappy with the exclusion of the Willamette Heritage Center/Mission Mill from the video. The WHC is THE place that represents Salem's heritage, now not all of that history is positive, but it is important. It really is a very lovely place that I feel is forgotten and underutilized by Salem residents. This video just adds to that by completely ignoring it in favor of showing businesses.

The video seemed more of a marketing tool for local businesses than it did to promote Salem as a whole. I agree with your point above as well, that the video is tailored to those who have more income, and ignores the reality of the majority of Salem's residents. They show shots of Bentley's and of fancy bars, but those places are out of the reach of many of Salem's residents who are absent from the video.

Of course this is a marketing video so it is not surprising that they focus on aspirational images.

Probably best not to take this too seriously. It's puff piece. That's okay. But having said that, you'd never know from watching this that 1 out of every five Salemians is Latino. We have a long way to go before we become a multi-cultural community. There's a lot of de facto segregation and disrespect for Latino culture in this town. A lot. A good example is the Cinco De Micro event next weekend that I think is disrespectful of an important historical event that has a lot of meaning to Mexicans. What would we think if some town in Mexico appropriated our July 4th holiday, gave it a goofy name, and used it to brand a beer tasting party?

Obviously this advertisement wasn't created to summarize the entirety of Salem. It's an ad for Salem's businesses. What is insidious about propaganda like this is it serves to reinforce the status quo. In their blog post announcing their endorsements for City Council and Mayor, the Chamber of Commerce said,

"Business needs to operate in a stable environment. Eighteen years ago, Salem had a City Council that did not create such an environment. Businesses were attacked with words and policies, which created division in this City. As a result, Salem suffered. In 2000, leaders (business leaders, civic leaders, and citizen activists) in Salem worked extremely hard to put City Councilors in place that would create stability and unity. That change created an unprecedented run of success in Salem, even excelling through a recession.

It is important not to become complacent. There is still a small, but vocal, group who would like to see Salem return to the way things were 20 years ago. We believe that agenda will take Salem in the wrong direction."

This video is an implicit response to that "small, but vocal, group" of residents and political candidates that want to counter the Chamber's influence within our City's politics. The candidates that did not get the Chamber's endorsement are all critics of the status quo in Salem. This video is a part of the Chamber's overall mission of representing the interests of Salem's ownership class. They want to change the narrative put forth by those who advocate a more equitable, sustainable, progressive city. They are actively working against the interests of Salem's working class and poor and videos like this are just another tool in their belt. The Chamber wants to change the narrative. They want to change the subject. We shouldn't let them.

This is a good set of comments that I think need to be posted under each time the video is shared. My first reaction was that it was a nice piece of video work, but did not think much of the content. Was thinking, wow! these photographers can make even Salem look pretty good...when I know of all the blemishes that need attention.

Now I know it is just a marketing piece for local businesses. That should be made more widely known.

I agree that one of the problems with this video is that it is not culturally or economically diverse...so it is not representative of Salem. It is something produced by people who live in a bubble...a bubble of their own making, and not of reality.

Yes, and I agree about too much drinking of alcohol. What do they want people to think of Salem...are we all swilling beer and wine? I think not!

@ Lee - Check about 2:33 for a brief shot of the Saturday Market with a guy playing a guitar! There's a problem of form & content here: The fast-pasted editing is not at all expressive of Salem. They would do better to slow down, have fewer scenes and let them develop a little more.

But it's true, the market scene doesn't show food or farm and so still support's Lee's point about agriculture generally.

(Grape-growing is farming, though. But it's true it's for what has become a luxury good, not basic potable drink or food staple.)

To echo Alex, there's little in it that isn't generic. All the restaurant scenes could take place in basically any city. There's not enough on things you can only find in Salem, or things that are distinctively or recognizably Salem.

@ Jim - It may be a puff piece, as you say, but it was a Chamber project and will be used by businesses and others. At the moment it has almost 70,000 views and has been shared over 2,600 times. It's quite popular and as such is worth attention.

You are right that those restaurant scenes could take place in almost any city. But those scenes have not been pretty rare in Salem until recently. That's just an example of some basic elements common to other cities that I once took for granted before moving to Salem! So it seems worth celebrating and communicating that Salem does have these things now. Especially to those that have written Salem off in the past.

What is distinctive and recognizable about Salem? Whenever people want to make Salem look good they just put a narrow lens on a couple blocks of downtown when the rest of the city is just generic suburbia.

I think there are some distinctive places in Salem. Willamette Heritage Center, the State Capitol, the Capitol Mall, Willamette University. Riverfront Park has a lot of potential, especially if they add some food cart pods. As for neighborhoods; Gaiety Hill and Fairmount are both lovely as is the neighborhood near Chemeketa and State.

Certainly a lot of the newer neighborhoods are cookie cutter developments, especially in West Salem.

You are right AK. I do like the Heritage Center and the neighborhoods you mention are quite charming. The problem is I can't get groceries or complete other errands in those neighborhoods. I have to endure the strip malls of Commercial, Mission, Lancaster, River Rd., Portland Rd., Wallace Rd., etc. to get most anything done in Salem. Those are the places where most of Salem life takes place and they are not distinctive at all. They are indistinguishable from any generic suburban landscape that you see in just about any small to midsize US city or suburb anywhere in the country.