Bit of Commercial-Vista Plan gets Funding; SCAN and Morningside get Updates

After a planner left the City's Transportation Planning group in 2015, the Commercial-Vista Corridor Study lurched some and even went dormant. It's waking up from the latest hibernation, and SCAN and Morningside will get updates this week.

Late last Spring you might recall a version of the final report, presented to the Planning Commission. 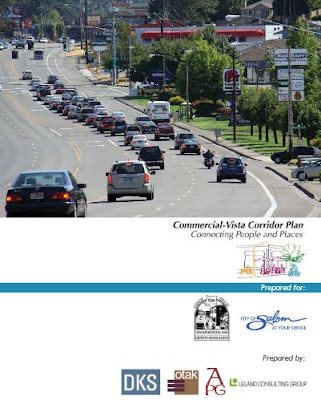 Then it went quiet again.

That version of the report has been tweaked slightly and posted again (old from May 2016, new from February 2017; both are at the old website, and the new City site doesn't appear to have them yet; hopefully the City won't orphan the links and create massive linkrot!) and it looks like the City is setting up a new round of updates.

And there is substantial news to deliver.

The buffered bike lanes and enhanced crosswalks on middle Commercial between Oxford St SE and Winding Way SE are funded and will be completed as part of the ODOT's All Roads Transportation Safety program (full saga here).

There's only two beacons with medians proposed, and you might remember that one at Fred Meyer was deleted, probably because of the gas station going in across the street and all the conflicting turning movements. That's a meaningful loss. In the picture here, you can see a person with a walker crossing to reach the bus stop at that location. Drivers getting gas are prioritized over his need to reach the bus stop safely. Sure, the numbers advantage drivers over walkers by a large margin, but are we sure that's the most just outcome?

Still, the plan in general, and this funded project in particular, will be a solid improvement, though it still is meaningfully shy from using current best practices. It remains a little autoist in conception. It seems like it deserves a grade of "B" rather than an "A." (But if Salem could do a whole bunch of "B" projects quickly, that would almost certainly have greater total utility than only trying to do a few showcase "A" projects.)

So at both SCAN and Morningside on Wednesday the City will be giving an update on the Commercial-Vista plan.

In the Morningside minutes, Councilor Nanke spoke about transit and ride-booking companies, and seemed to make explicit, or at least sidle up to, the idea current in some libertarian circles that ride-booking is a substitute for transit:


Brad [Nanke] went on to mention there are three ways to handle city transit problems: busses, taxis and Uber/Lift [sic]. He said one of the issues City can best deal with is the need for background checks on the prospective drivers (Police can do this more thoroughly than cab/ ride providers. There were a few more comments on the subject, and a mention that Uber and Lift are both less expensive than taxi service. [Cherriots Board member] Bob Krebs added that Salem Transit is not opposed to Lift or Uber as long as they are required to meet the same rules (standards) as Taxi, but they a(and Taxi) are way more expensive than Transit service. Someone mentioned that possible unionization may have some impact as well. There were some comments on relative safety of Uber and Lift vs. Taxi and Transit.

Ride-booking is not a substitute for transit and in fact arguments like this slide all too easily into arguments to discontinue transit with ride-booking as the replacement. (See here for more on ride-booking. Here's a transit consultant on ride-booking's impacts and threat. When the matter comes back to Council there will be more to say. SCV reports this will be March 13th.)

In other news, two bike projects won funding from the City:


The bike park news is especially terrific, and it looks like funding could be essentially complete. Here's what they said previously:


The $30,000 Goodworks Grant from the Rotary Club of Salem, $20,000 Oregon Community Foundation Grant, individual contributions from many of you, support from local businesses like Withnell Motor Co and Venti’s Cafe places our fundraising efforts at $91,500!

Dang, I was hoping for separated bike lanes. Buffered bike lanes are a baby step. Bit by bit, I suppose.