At the MPO: A Legislative Update and Center St Bridge Possibility

Our local Metropolitan Planning Organization meets today, Tuesday the 28th, and maybe the most interesting thing buried in the agenda is potential interest with the Legislature and ODOT in funding a seismic retrofit on the Center Street Bridge.

Much of this is speculative or potential, work-in-progress at the Legislature, and it's probably not a good idea to focus too much on one detail or another. But it's not nothing!

You may recall from the fall that some bonus money in our current cycle is funding a seismic study to formulate a plan for the bridge, and today's agenda item talks about a chance that construction on it could be funded as part of the omnibus Transportation Package.

The agenda item in question is an update on the meetings of the Joint Committee on Transportation Preservation and Modernization. SKATS has been monitoring one of the subcommittees, the Congestion Work Group:


[The full Joint] Committee members were divided into four work groups....SKATS and Central Lane MPO staff have been following the discussion at meetings of the four-legislator Congestion Work Group led by committee Vice-Chair Senator Boquist (Dallas). This work group’s focus has been on major congestion issues in the Portland area....[italics added] 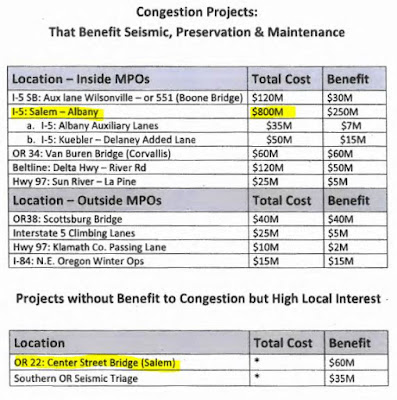 In addition to a set of first priority Portland-centric projects, for the Congestion Work Group,


ODOT did [also] include a list of other congestion and major projects around the state for consideration by the Work Group (See attached Congestion Projects: That Benefit Seismic Preservation and Maintenance). Two of those projects are in the SKATS area: the I-5 lanes between Kuebler and Delaney and the OR22: Center Street Bridge (seismic upgrade). Some of those projects around the state were added to two scenarios labeled “Course of Action 2”

The cost of the proposed I-5 work between Salem and Albany is huge!

At last night's Congestion Work Group meeting, the presentation slide deck suggested the Center Street Bridge was not as much of a priority as "Course of Action 2" might seem to suggest. It was on a slide that showed "possible future" projects that were not part of the "ten year priority" list. They were labeled for "years 10-15."

It's hard to know how to read all this. It would be nice for Legislators and ODOT to feel more urgency about the seismic retrofit of the only cross-river connection in the State Capital. So there might be an advocacy opportunity here. Maybe we should worry less about traffic delay and more about loss of life. (This is also true for conversations about speed reduction and roadway safety counter-measures!)

At the moment, though, it seems possible, but unlikely, that the Center Street retrofit would be funded in this pass at an omnibus Transportation Bill.

(There is nothing on the Salem River Crossing, it might be interesting to note.)

From the last meeting's minutes, skepticism on the Broadway road diet:


Chair Cathy Clark asked for an explanation of the rationale for the Broadway Street Road Diet project as that area is already a bottleneck area, and it seems that the proposed project would exacerbate congestion issues in that area. Mike Jaffe responded that it is addressing a safety problem and will include a continuous leftturn lane which will remove left-turning vehicles from the traffic flow.

The Policy Committee meets at noon on Tuesday the 28th.

By email a reader points out there actually was one or more small mentions of the SRC in the Congestion Work Group presentation.

In a third "course of action," the SRC is mentioned in a column headed "possible future, tbd" for "years 10-15" or later.

It is also possible to construe the "MPO Salem Center Street Bridge Replace $170-$250 million (years 10-15)" as a reference to something like Alternative 2A, as it would make little sense to plan a replacement nearly concurrent with a seismic retrofit.

This is definitely more of a footnote than a smoking gun, of course, so we shouldn't place too much stress on it at the moment. (Things could change, however!)
Posted by Salem Breakfast on Bikes at 7:00 AM

Edit: added a footnote since a reader points out the SRC does appear in the Congestion Work Group's presentation and discussion.