Talk on Climate Change and "Merchants of Doubt" this Friday 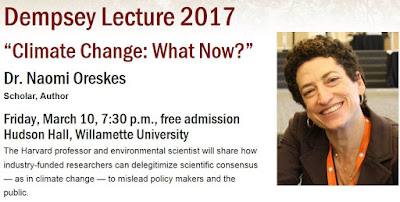 Friday night the 10th, at Willamette is the annual Dempsey Lecture. This year Naomi Oreskes will discuss "Climate Change: What Now?"


The Harvard professor and environmental scientist will share how industry-funded researchers can delegitimize scientific consensus — as in climate change — to mislead policy makers and the public....

Professor Oreskes’s research focuses on the earth and environmental sciences, with a particular interest in understanding scientific consensus and dissent.

Her 2004 essay “The Scientific Consensus on Climate Change” (Science 306: 1686) has been widely cited, both in the United States and abroad, including in the Royal Society’s publication, “A Guide to Facts and Fictions about Climate Change," in the Academy-award winning film, “An Inconvenient Truth,” and in Ian McEwan’s novel, “Solar”.... Her 2010 book, “Merchants of Doubt: How a Handful of Scientists Obscured the Truth on Issues from Tobacco to Global Warming,” co-authored with Erik M. Conway, was shortlisted for the Los Angeles Time Book Prize, and received the 2011 Watson-Davis Prize from the History of Science Society.

In a long two-parter on Exxon (part 1, part 2), The New York Review of Books says


Naomi Oreskes (Harvard) and Erik Conway (California Institute of Technology) tell the story of what they call the “Tobacco Strategy.” Tobacco industry scientists and executives knew by 1953 that smoking caused cancer. Rather than see sales diminish, however, they decided to deceive the public. Since the proof of smoking’s danger was established by science, they resolved on a long-term effort to create doubt about that science. And they realized that the best, most credible messengers in a campaign to discredit established science would be other scientists....

When Exxon began to “emphasize the uncertainty” of climate science, the scientists who espoused its positions were often veterans of those earlier denial campaigns.

One particular place where we have seen "emphasizing the uncertainty" is at our Metropolitan Planning Organization, where doubt and uncertainty has been to used to delay or evade a framework for beginning to assess transportation and land use for greenhouse gas impacts.

Thought we aren't following the Legislative debate on a carbon tax or cap-and-trade scheme, stock "uncertainty" memes and arguments are almost certainly being used there as well.

So the topic is relevant right here in Salem in addition to its national political and general cultural relevance.