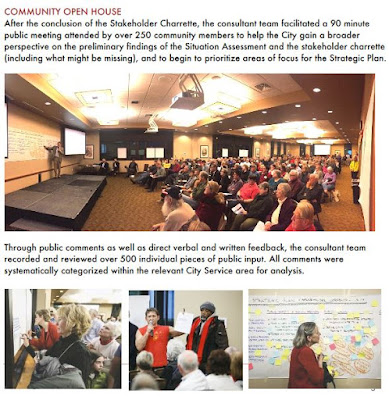 Council meets on Monday for a work session on the Strategic Plan, and there is a lot in it! (It would be surprising if Council can land on an approach in just one work session.)

Both SCV and N3B have already remarked on this, but it is nice to see again the overwhelming public sentiment at the January 31st Open House in favor of more and better options in transportation, as well as the magnitude of doubt about the waste in the Salem River Crossing.

Those sentiments are summarized with some analysis in the report on the "Stakeholder Charette" and "Community Open House" on January 31st. 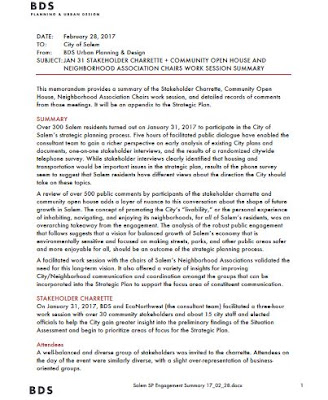 The report, however, probably did not dwell enough on the divergence between the "stakeholders" and the "public." (Salem Weekly has more on the composition of the "stakeholders.") It erred too far in a harmonizing direction and didn't grapple with the full scope of some real disagreements. Flushing these out into the open and facing them more squarely will almost certainly be necessary for the success of the overall project.

The "Situation Assessment Report" also contained some interesting findings. The most important one from here seemed to be the third one, cited in full:


Finding 3. Elected officials and staff do not have coordinated systems to make, implement, and evaluate policy decisions

Although residents expressed satisfaction with City services overall, elected officials expressed uncertainty about their understanding of community priorities and choices for strategic service delivery that align with those priorities. This uncertainty results in part from the City’s decision - making processes.

The City has two processes by which it makes citywide policy and budget decisions. The first is Council Goals, a biennial process in which the Council identifies broad priorities and initiatives to achieve those priorities. The second is the citywide budget process in which the City Manager’s Office and Budget Office set budget targets for each department; departments create budgets that fit within those targets; and the Citizen Budget Committee and City Council review, hold public hearings, and approve those budgets.

That dual process has some limitations. First, the Council Goals process is short-run and not supported by policy evaluation. Consequently, staff and Councilors interviewed for this assessment felt the organization was drifting without answers to critical questions like: What is the City’s longer-term vision for the future? Is the City making deliberate progress toward that vision? Does that progress align with community priorities? Second, in the absence of clear direction from Council on relative service delivery priorities, staff makes policy decisions through the budgeting process about what services to provide at what level.

The professional literature on high - performing institutions supports some practices that Salem has not fully implemented. In a high-performance government, the City would have purpose statements (vision, mission, values) that answer the question, What is the City’s vision for the future? The City would have a package of forecasting, planning, and evaluation systems to determine the roadmap to achieve that vision and track progress. Those systems would allow Council to:
Within those systems, there would be a clear delineation of roles and expectations. Council and staff would work effectively together to make policy (Council, with support from staff), implement that policy (staff), and evaluate outcomes (Council, with support from staff)

This is a real structural shortcoming. So much of the decision-making is ad hoc and driven by the politics-of-the-moment, and is not actually driven by any "big picture" vision or strategy, or even our existing policies.

But the problem may not so much be the absence of a strategy; rather, it might be more that there is a disconnect between words and action.

We have observed with every annual and quarterly report that we have no real assessment on Enterprise Zones, on Urban Renewal Grants, or other tax incentives and public subsidies - we have no real idea how well they accomplish or align with City policy goals.

More particularly of interest here, we say we want to reduce drive-alone trips, but yet we struggle with facilities for walking, biking, and busing, and devote an insane proportion of resources to the Salem River Crossing. Our budget and staffing doesn't always (or too often doesn't at all!) align with our cheerily professed goals or values.

This is consistent with another finding:


Finding 8. The City’s Comprehensive Plan does not provide an overarching vision and plan for how the City will grow

Part of the problem is that the Comprehensive Plan isn't taken seriously.

What's not clear about these Comprehensive Plan (IV)(J) Policies 11-18? The problem here isn't that there's not a vision. There is a vision. The problem is that the vision is paid only lip service. 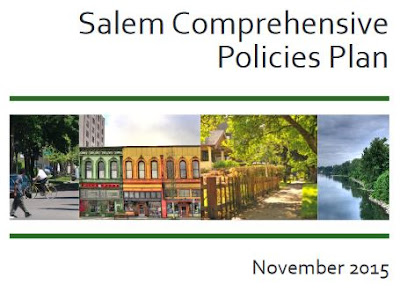 In the next road bond, every project should be assessed: Does this decrease reliance on SOV and decrease overall traffic demand? If it is not obvious that it does, it should have to meet a much higher threshold to be included in a bond or to be funded in some other way.

The City already has these juicy policies! We just freakin' ignore them.

Finally, and again something that does not square with the extravagant resources allocated now and projected in the future to the Salem River Crossing:


Finding 12. The City has deferred maintenance on critical infrastructure

A cursory analysis, which should be revisited and fleshed out, indicates that the City could be underinvesting in its infrastructure by as much as 100%+.

I think the report may overstate the absence of high-level guiding strategy, and instead pays insufficient attention to the ways the City fails to execute on and later assess policies or values that have been clearly stated.

In the general talk about the Strategic Plan, it had not been clear that the Plan was explicitly to be linked to the Budget process, so it was nice to see that called out in the Staff Report.


As part of the Fiscal Year 2016-17 Budget development, the Budget Committee and City Council discussed the need for an overarching plan to guide future decision making as the community and organization change.

So, lots to chew on, and hopefully Council will take the time to assemble a strong and compelling vision - and then implement what is necessary actually to do it. Much of the problem is not the technical one of lacking strategy, vision, or policy, but instead is the political problem of actually doing what we say we're going to do.
(See previous notes on the Strategic Plan process here.)
Posted by Salem Breakfast on Bikes at 5:00 PM

A couple of observations as one who participated in the Strategic Planning open house. and the Neighborhood Association chairs work session.

First, the 'Stakeholders' as has been pointed out by others were primarily business people. What they contributed to the process was emphasized in such a way that you had to react to it, rather than necessarily add more. This was evident at every level. For example, they got interviewed at length, then they got invited to a private work session. Then their ideas were used as the basis for the Public Open House and the work session with the Neighborhood Association chairpersons. It set the tone to a large extent.

Second, a huge segment of our population was totally ignored in this entire process. Twenty-five to perhaps thirty percent of the people who live in Salem are Latino or other minorities. They were not represented in either the Stakeholder or Public Open House. Who can you say you are creating a Strategic Plan for Salem and leave out one quarter of the population?

No effort was made to accommodate language or disabilities to see what those citizens valued or wanted to see implemented as goals. I had to nag the city to even have a sign language interpreter. And when it was pointed out the glaring omission of the Hispanic community, there was no effort to reach out. The City could have easily gone to local groups like Mano-a-Mano or Salem-Keizer Coalition for Equity and had a work session.

From the outline of the process it looks like the plan is to try to get to the level of identifying how a goal might be implemented. This is very good. However, as I pointed out to City Manager, Steve Powers, the main reason that such strategic plans fail is because those defining the tasks to be done often do not include the people who are actually going to be doing the work. They need to be asked whether they either can or are willing to do those things. Buy in from the workers doing the work is essential. Do the people have the tools needed? Do they have the skills needed? Do they share the values?

Some might say, well it is your job, so we expect you to do it. But that is ignoring is the very human factor, that if you do not think what you are being asked to do is worthwhile, you tend to either ignore it or do it poorly. Deming learned this and created techniques for including the worker in decision making and showed how it increases productivity. So, I encouraged Powers to think about that as they move forward.

Evaluating results is something that I feel the City has done so poorly over the years. They have this bad habit of writing reports in such vague terms or with such glowing praise to make themselves look good, that there is seldom any critical thinking. Councilor then have a hard time finding the truth as to what happened and what if anything can be done to make a program better.

I'm hoping that the new City Manager is going to help the City make the necessary changes so that we can really make progress as a community.

I agree that what is growing more obvious is that Salem needs a true comprehensive plan. Sadly, Salem Futures was tossed aside after a million dollars and hundreds of hours of work. I am not sure how we get back to such a process, but I think that even with its flaws, this effort gives a glimmer of hope.

Two excellent points 1) about the way business interests have from the start largely framed the terms of debate and analysis, and 2) the absence of Latinx interests.

Your point about Deming and internal processes suggests something like an audit more than a strategic plan might also be necessary, right?

And you are right to point out that this process should also contain the self-reflection on - Why do we have all these studies that we "forget" about or discard? Talking about Salem Futures, Vision 2020 - some kind of retrospective assessment of major planning efforts and their fruits should also be included in this process.

Maybe we'll come back to this, but probably should also have highlighted Finding 4:

as this dovetails with the point about "economic development" and the way we don't assess it.

CityLab has a recent piece on this, "Handing Out Tax Breaks to Businesses Is Worse Than Useless."

It discusses a technical report, "A New Panel Database on Business Incentives for Economic Development Offered by State and Local Governments in the United States."

We may be approaching the point where the answer on tax abatements is not just simply "we have no idea whether they work," but instead is "usually they don't work."