A Century Ago: Truitt Bros Building on Market and Front to Celebrate 100th

In the summer of 1917 the cannery on Front and Market Streets, now a Truitt Bros. facility, was constructed. For its age and role in a key Salem industry, it could be eligible for listing on the National Register of Historic Places or for other protection and notice under our historic preservation code. But it is also a working industrial building that has been remodeled, is not a high-style exemplar of anything, and is not something that needs to be "frozen in amber" with a fixation on any "historic integrity." As of 2013, it was not considered an "historic resource" in Salem.

While it's a building that deserves a certain deference, it is valuable mainly because it has remained useful. Hopefully can be adapted and readapted as each generation finds new uses. As our canning and food processing moves out onto the edges of the city, like the new Norpac complex at 25th and Madrona, and our riverfront property is gradually redeveloped with the concomitant demolitions, this is something to watch.


Plans for the first unit of the big fruit and vegetable evaporating plant proposed by the Wittenburg-King company in Salem are being completed by Sutton & Whitney and construction on the unit will be commenced within a short time. The same architects have charge of the work on the branch plant for The Dalles. The plant in Salem will be an exceptionally large structure of its type when completed in all units. It will cover a total ground area 100 by 700 feet, fireproof construction in the first story and basement. The general structure will be one story and basement only, but there are two units, one for each end, to be 50 by 100 feet, which will be two stories and basement and more elaborate in their construction than the remainder of the plant. The first unit, which is now to go it, is one of these two-story portions planned for the general plant. The building will be at Market and Front streets, in Salem, and will serve as the headquarters and parent plant for the fruit and vegetable evaporating industry which the Wittenburg-King company is developing. The demands of the business are growing so steadily and rapidly that it was necessary in planning the plant to proved for quickly increasing calls for floor space and hence the expansive unit design that has been developed. The first unit, completed, will represent an outlay of approximately $30,000 and the entire plant when completed will represent between $150,000 and $200,000.

Wittenberg-King was a Portland company, and was expanding in The Dalles and in Salem. It appears they were developing a cooler air dehydration in competition with hot canning and with hot dehydrating as a major industrial form of food preservation.

From the January 1920 issue of Canning Age, "Developing a New Idea in Food Preserving":


The fundamental difference between the King processes of dehydration and the old methods of drying and evaporating lies in the use of circulation of air, under the King method, as compared to the use of intense heat under the old methods. The purpose of both is to eliminate the moisture content which is the cause of deterioration. The old methods of using intense heat accomplish this purpose, but at the same time they alter the chemical composition of the product. Along with the water they remove certain of the essential oils and flavoring qualities of the food. They break down the cell structure causing the product to shrivel, and preventing it from ever re-absorbing the amount of moisture removed.

Under the King method, the temperature is never allowed to reach a point high enough to cause a chemical alteration to take place nor to permit the breaking down of the cellular structure. Only the water is removed and the cells are left intact, so that when water is returned to the product, the cells act as a sponge, taking up all the moisture they lost, and the product returns to its original condition of freshness, crispness, color, and flavor. The King Company calls this the process of "refreshing" as distinct from the process of ''soaking'' ordinary dried foods.

That description of the process is part of a longer profile of the firm.

A SHOE salesman travelling from Boston to the Pacific coast stopped off in California, as salesmen sometimes will. Among other things, for there is much of interest in California, this salesman saw the Bear Staters spreading their beautiful grapes out in the sun to dry, and he tasted the resulting raisins and he smacked his lips. A little later he travelled through Oregon, felt the balm of the Oregon sun, saw her wondrous snow-capped mountains and her fertile fruitful valleys, and he fell in love with the webfoot state, as Bostonians often do. He tasted her fresh fruits and her delicious crisp vegetables, and again he smacked his lips.

"Why", reasoned Mr. King, for that was the shoe man's name, "can not some process be evolved for preserving these wonderful fruits and vegetables and for transporting them to our crowded cities of the East so that my people can enjoy them in their ripeness and freshness the same as I am enjoying them now?" He had eaten canned products and he had eaten products dried and evaporated by the old method of using intense heat, but. neither satisfied Mr. King. He wanted his people to get them just as they came from the gardens and orchards, the same as he had done. As he thought, there flashed into his mind. Nature's method, as he had seen used with the raisins in California. Down there it was the warm wind blowing continuously which gradually removed only the water from the grape and which left the sugar and fine flavor found in the sun-dried raisins. "There, at least is a suggestion, food for thought, and a chance for some originality." thought Mr. King. That is about the way he told the writer the story of the idea of King's Dehydration.

From that time, more than ten years ago. until the recent organization of the King's Food Products Co. of Portland, Oregon, the story would be a long one. It would be a story of diligence, experimentation, research; of some disappointments and of many achievements. Through it all would run the thread of an enduring and unbreakable faith, the faith of men who "were right and knew they were right" and who "went ahead." Growth of the Dalles Plant In 1915, the Wittenberg interests bought into the King's processes, completed the securing of patents both in this country and in the major foreign countries, and organized the Wittenberg-King Co., of Portland, Oregon, to go into the business on a large scale.

In the following vear, thev built at The Dalles, Oregon, in the center of a rich agriculture and fruit-growing district, the manufacturing plant....

Before the end of 1917, when the big addition was added to The Dalles plant, the desirability of still greater expansion was seen by the company managers, and they sought a new location for a brand new factory. The location was found at Salem in the Willamette Valley in Oregon. The company's main office was moved from The Dalles to Portland, and by the time the prune season was on, in the same year, both plants were going full blast....

War contracts seemed to be an important part of any early success for the business.


In 1918, the company offered the plants, and they were eventually entirely devoted to the production of food for the armies of the United States and France. For a time both plants manufactured nothing but dehydrated potatoes for the American government. Approximately one million and three hundred thousand pounds of potatoes in their dehydrated form were supplied.

The Truitt Brothers purchased the cannery in 1973, and it still seems functional today. Though it would not be at all surprising if long-range planning for the firm did not include it.

This area is in flux right now. The railroad running down the middle of Front Street is an awkward expression of multi-modalism in our current transportation system, and Front Street at some point will likely be rebuilt. You might recall that just south of this site, the bridge over Mill Creek from 1913 is probably the oldest functioning street bridge in town. 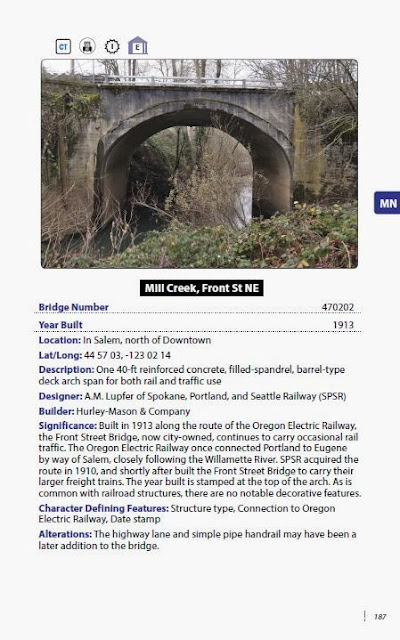 And just on the other side of Mill Creek, at the intersection with D Street, the City recently posted a Hearing Notice for an Assisted Living and Nursing Home plan on the site of another old warehouse.

In a later proposed phase (this could be more for show than an expression of serious intent, do note) they show a 15 foot easement and 10 foot path along the river and creek.

As the area transitions from industry, the cannery may be an increasingly awkward fit. But it is not difficult to imagine the building as shops, restaurants, or loft-style residences - any number of new uses can be imagined for it. (Whether they pencil out, of course, is another question, but it's easy to imagine and hope!)
Posted by Salem Breakfast on Bikes at 10:00 AM