Tomorrow night, Wednesday the 17th, the University of Oregon will award the 2017 George McMath Historic Preservation Award to the Oregon Black Pioneers.


Since 1993, the Oregon Black Pioneers, an all-volunteer, nonprofit organization based in Salem, has produced publications, mounted exhibitions, presented lectures, sponsored conferences, organized musical and theater productions, delivered classroom presentations and curriculum to public schools, and recognized burial sites for Black pioneers in Salem. Their dedication to shedding light on Oregon’s African American pioneers has revealed a rich history that enriches the experience of all Oregonians.

This is the first time the award has not gone to an individual or to someone principally concerned with the preservation of buildings.

You might remember the exhibit "Rails through Salem: A Black History Connection" a couple years back. 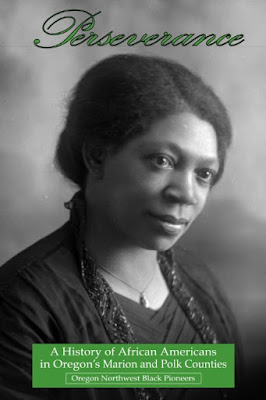 Or the book, Perseverance: A History of African Americans in Oregon's Marion and Polk counties.

Or the dedication in 2007 of a monument "in remembrance of Oregon's black pioneers, named and unnamed, buried in Salem Pioneer Cemetery."

They've amassed a substantial body of work that should be noticed!

Race is an important part of our story here that is often minimized. Three other items of local interest are worth mentioning.

Later this month Restore Oregon is doing a tour of settlement-era houses, and the Delaney House between Salem and Turner is one of the stops (more on the house here also). Its story involves wealth extracted from slave labor; a murder and the murderers using blackface for disguise and an attempt to shift blame; and the testimony of a child of ambiguous family position, perhaps a servant or quasi-slave even. It is not possible to tell any version of the story without considering race, power, and social relations, though often times they are minimized to highlight other elements in the story.

Here's a mid-century note by Ben Maxwell on Delaney's murder there:


Salem's first big murder story made the headlines 80 years ago. Folks discussed the crime for two decades. And the lurid, double execution for that crime occurred in the frontier village that was Salem in l865. It was a pioneer Salem with a few muddy streets; sinister dives and a clique of hard-drinking, hell-raising citizens.

Beale and Baker murdered old man Delaney for a cache of gold coin. They were hanged before spectators estimated to number between one and five thousand.

Daniel Delaney came to Oregon in 1843 from the south. He had sold his slaves and was well-to-do and hospitable. George Beale, who had worked for old man Delaney, was often his guest at the farm home about a mile west of Turner.

Beale knew a lot about the Delaney household. He knew that the old man had money and had recently sold many cattle for cash. He believed he knew where the wealth was hidden.

Beale knew a lot but he did not know enough to keep his mouth shut. He discussed freely the old man's wealth and told confidants how easy it would be to lay Delaney and take his cash.

Even so, nearly everyone liked George Beale. He was a genial, good-looking fellow who operated a saloon where the Marion hotel now stands. He was a member of a secret and honorable fraternity.

George Baker was different. He was a Johnny-come-lately to Salem. Things were said about the Indian woman who was his wife and he was a frequent patron in Beale's saloon. Baker was a butcher by trade.

In the twilight of a Sunday afternoon, January 9, 1865 two men who looked like negroes drove up to Daniel Delaney's home. One went to the door and asked to be directed to the home of one of the old man's sons. Delaney stepped outside.

At this point the stories differ in details. But a musket spit fire. Old man Delaney died. Then Beale and Baker entered Delaney’s house, ransacked it. Admittedly they took $1400 In cash and some believed the loot was much more.

Zooming back some in a bigger picture view, over at the Woolen Mill on Thursday, they'll be discussing "Citizenship and Civil Liberties on the World War I Home Front":

May’s History in the News program is presented in partnership with the Oregon Historical Society, and features a presentation by and discussion with Dr. Adriane Lentz-Smith, Dr. Kimberly Jensen, and Dr. Steve Sabol.

Americans fought their wars for democracy at home as well as abroad. Wartime propaganda and policies defined new rules for the status and practice of citizenship in Oregon and across the nation. Women activists, for example, claimed a more complete female citizenship. For women of color and women in ethnic communities, this push intersected with claims and contestations rooted in their racial and ethnic identities and pushed back against a system of white racism that seemed destined and determined to expand. Native Americans, African Americans, immigrants, and hosts of others all engaged in war-related debates and activism that furthered their ongoing claims to civic rights and obligations. Some saw the promise of citizenship through wartime loyalty in support of government programs and the war effort. Others claimed a citizen’s right to dissent, often paying a high price to do so. This panel will provide audiences an overview of these histories and create opportunity for discussion about their ongoing legacies today. 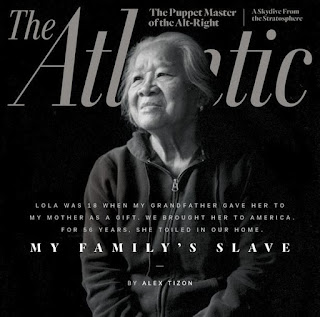 And over at The Atlantic, the last piece by a UO Journalism prof who just passed away. "My Family's Slave" is a story of late 20th century slavery involving in part a couple of decades here in Salem. It is staggering.
Posted by Salem Breakfast on Bikes at 12:01 PM

It's also for sale now, so the tour has perhaps also a little bit of sales function to it!