Tomorrow night, Wednesday the 24th, the second Open House for the Winter Maple Bikeway is at the Center 50+. There's also a community walk and presentation led by walking and biking advocate Dan Burden.

The project team has posted a draft of proposed treatments for the length of the Winter Maple Bikeway, and some of them might be worth comment. At the Open House there will be more information, and you'll be able to ask questions as well.

We'll go from south to north.

From Willson Park at State Street along the Capitol Mall north towards D Street, two main features stand out:
(It would be interesting to know why a curb-side protected bike lane was not recommended. There might be more to say later.)
At Union Street there's a traffic circle.

Crossing Fairgrounds at Norway is a challenge and this is probably the most complicated intersection:
It should be noted that work at this intersection is funded - though what is shown here may exceed the budgeted amount.

There are also two businesses right here, and they might feel closing off Norway to cars hinders customer access or "their" auto parking. Getting them on board with the project will be a great help; their active opposition could mean trouble.

On the residential sections north of here there are proposed a couple of speed tables to slow cars, and stop signs are turned 90 degrees to prioritize north-south travel instead of east-west cross traffic.

The diagonal section of legacy railroad track is troublesome for biking, and the team proposes new sidepath sections to cross the tracks at a perpendicular. Apparently this would not count as adjusting the current crossing, but instead is considered a new instance of crossing that requires new approvals from the railroad. In all the debate and deliberation over South Block and the Park Parcel of the Boise redevelopment project, the railroad was always very clear that they would not approve new at-grade crossings unless one was also closed elsewhere. This could be a tricky negotiation, far from a sure thing.

The crossing on Pine Street at Maple, where Caroline Storm was killed, looks pretty standard. Work on this intersection is also funded.
But will there also be a flashing beacon? And what about improved street lighting?

Just north of the Deaf School and JGEMS, there is a multi-use path proposed to connect the Maple alignment with Cherry Avenue.

Most of the land - maybe all of it - outlined by "Option A" and "Option B" was recently sold, and the City just posted a hearing notice for a very rudimentary development. They'd already issued demolition permits for the buildings at the center of the parcel outlined.

It's a very low-grade development, a plain gravel parking lot for the existing auto dealerships, but you wonder if more is planned for later.

If more development is in the works, Option A may be clearly inferior with all the new driveways and traffic. Especially if the development is for more car-related business.

On the other hand, at present and in the near future, Option B would be a little isolated and might not feel as safe.

It will be interesting to hear if any kind of consensus emerges on either one of these.


At Cherry and Salem Industrial there would be a diagonal crossing with a specific bike signal phase.

This looks a little like the signal at the corner of NE Oregon and Interstate Boulevard in Portland by the Rose Quarter. Folks getting off the Steel Bridge or using the Eastbank Esplanade use this to work up into the close-in north/northeast area, especially the Williams/Vancouver couplet. 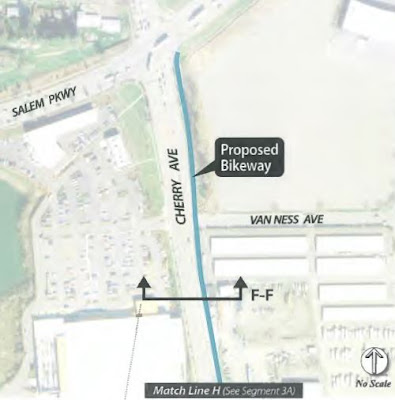 Then from Cherry north to the Parkway, there is a separated sidepath proposed in addition to the bike lane. Southbound travelers could use the bike lane or make two crosswalk passages to reach the side path, I guess. This leaves the long, long crossing on the Parkway unaltered. That portion may not yet meet a "family-friendly" standard and remain a real barrier. But it is also the border with Keizer, and that's where our project ends.

Aside from funding, three real challenges jump out:
On the positive side, and part of the funding question, construction on Pine @ Maple and on Fairgrounds @ Norway is secured, though it is possible additional funding will be necessary. See this from 2016 and final adoption last month. $566,200 is budgeted for five crossings, and these two could require significantly more than 2/5 of that!

There's more than just the bikeway details at the Open House, of course:

Recently they've posted teasers on swag and a personal invitation from Dan Burden, who seems like a real nice guy.

(Edit: Additional notes on car parking on Winter Street near Chemeketa, on Fairgrounds at Norway, on Pine Street at Maple, and on funding added in italics.)

Here are some brief notes, chat, and pictures from this morning's walk with City staff via Twitter and PNW Safe Routes.

And here's a fuller summary at PNW Safe Routes.