Here's an interesting moment in transportation.

At the same time as Herbert Hoover* was building out a system of price controls and food rationing for the United States Food Administration in August of 1917, Salem merchants were advertising the shift from a delivery system with credit to a "cash and carry" system that required customers to transport goods from store to home, business, or field.


There are academic histories of retail and commerce that treat this shift in detail, and maybe we'll come back to that for more. At the moment I can't fully situate this local moment in the national economic history, or even say how widespread it was here in Salem. So this is just a tantalizing connection and there might be more so say later.

Note also the gendered quality to the transportation burden: "At first it would undoubtedly be annoying to the housewife who has been all her life accustomed to having her purchases sent home at whatever hour she desired..."

And the fact that the delivery fleet mentioned in Ann Arbor is wagons, not yet cars or trucks.

Here in Salem, the old grocery at Market and Broadway, built about 1925 it appears, may have been the first "modern" type of store that was auto-oriented, with a parking lot and expressing fully in its form the expectation the customer would assume responsibility for transporting goods from the store.

And it wasn't until the chains came in a decade later that this fully became the norm. But of course in the 20s we also saw the return of retail credit. So it's not like there's a simple trajectory in one direction only.

While the big box store is totally premised on the huge parking lot, temporary car storage, and bulk purchasing, Amazon and UPS represent the return of the delivery model. Drones and robot vehicles may accelerate this. 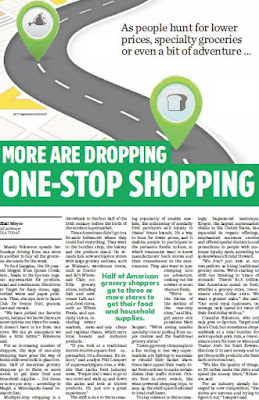 From a different direction, desire for community and walkable neighborhoods tends to support the return of the neighborhood-scaled store and the specialty store.

So again, this isn't a fully fleshed out interpretation here. But we don't give enough attention to the cost and time devoted to shopping transportation. The earlier delivery model meant that the cost of the transportation was directly included in the cost of goods. Our current model externalizes that transportation cost and shifts the burden to consumers and to cities, which we then make invisible and don't count any more.

* Interestingly, most of the local news stories do not dwell on the fact that Hoover spent time here. Most don't even mention it. Here's one piece that notes it only in passing:


Hence if Mr. Hoover, who trod the streets of Salem about a generation ago, will make it uncomfortable for the big packing plants that have brought the entire California output of tomatoes, he will receive the thanks of this part of the universe.

Here is more! The Piggly-wiggly store it discusses started in 1916. There's a photo of "Food Administrator Hoover" in it also - though it does not mention any local connection.

Many millions of dollars are now being paid in savings to market basket patriots for carrying home their groceries as Uncle Sam has admonished the public to do. Since Clarence Saunders of Memphis, Tenn., launched with his unique advertising a public pantry system with "piggly wiggly" aisles, the pick-it-out yourself-from-shelves plan of grocery retailing has become general, but in dry goods the household buyers are not yet doing much to cut delivery costs.

The spread of the "cash and carry" grocery store, inspired by Saunders' success with the plan which still is unique, has been electric. Saunders credits printers' ink with a big share in the success. From the first day when his page advertisement announced the opening of a retail grocery embodying the piggly wiggly aisles and no show windows, no show cases, no counters, no middlemen, people have swarmed in by thousands, chosen from the shelves the things they wanted without the urging of any clerks, paid the bill at the turnstile exit and carried the purchases home. Naturally such a result encouraged thousands of other groceries to adopt the "cash and carry" principle even if they lacked the piggly-wiggly features which Saunders used to reduce costs still more.

From one to 100 stores with the "piggly-wiggly" aisles already are operating or in preparation of many cities all over the country. In Chicago there soon will be 500, in New York a smaller number and in Washington several scores. Moreover, there are, or there are in preparation, stores in Ohio, at Dayton; in Indiana at Elwood, Indianapolis, Muncie, Anderson; in Illinois at Danville, Aurora, Elgin, Joliet. Rockford, Belvidere, Freeport and Champaign; in Wisconsin at Janesville and Beloit; in Nebraska at Fremont; in Kentucky at Louisville; in Arkansas at Little Rock; in Alabama at Birmingham, Montgomery, Tuscombia and Mobile: in Louisiana at Lake Charles and New Orleans; in Tennessee at Jackson, Nashville and Memphis; in Texas at Houston, Beaumont, Yoakum, San Antonio, El Paso, Armarrillo and Waco.

Also now Costco is public with a desire to move out south to Kuebler.

So it is a question whether that new turn lane is still deemed necessary.