New Funding may Boost Safe Routes Planning: At the MPO

The Technical Advisory Committee for SKATS, our local Metropolitan Planning Organization, meets next week, and they'll be talking about Safe Routes to Schools.

The Legislature just funded Safe Routes with $10 million annually. That's statewide, though, and competition for funding will be very competitive. It will be interesting to see how far it actually goes. While the Street Trust and others have been quick to trumpet the feat and funding level, as a practical matter I think it is going to be disappointing when we see how thinly it ends up being spread statewide. Still, that funding level is effectively a huge jump from nothing - that's an "infinite" increase!

Locally, you may remember that Hallman Elementary has struggled with a Safe Routes program, and that the whole Bike and Walk Salem project was supposed to generate a city-wide Safe Routes plan. Here and there, there have been little spurts of Safe Routes planning and even programming, but nothing like a sustained and coordinated effort.

At the SKATS meeting there's no specific action on the agenda, but it's very nice to see "the discussion of how to prepare and coordinate to apply for these funds."

Maybe we are at an inflection point and this will change.

Even if we aren't successful in securing funding from this particular source, the planning for it will yield actionable plans that can be funded by other means. This should take Safe Routes planning here locally to another level.

Planning for the 2021-2024 Statewide Transportation Improvement Program is also beginning.

At the most general level, the first matter for ODOT is to settle "the big question," the general proportion and priority for different kinds of projects. 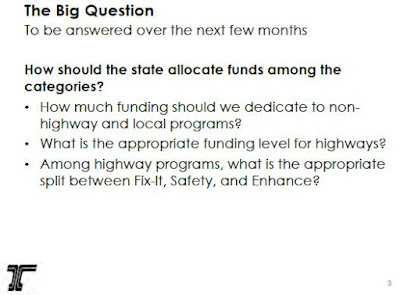 Not directly on the agenda here, ODOT also has a survey out soliciting public opinion on "the big question."

It's good to see an expression of "fix it first" at the very top, but "reducing traffic congestion" is also at the top, and that gets resolved to "build more highway" rather than "make it easy not to drive." Those items like "public transportation," "sidewalks and bike lanes," and "Amtrak service" are buried at the bottom of the list.

Check it out and add your two cents!

SKATS will also be making comment to ODOT and the OTC on priorities. At the moment they are likely to advocate for "highway expansion" and "free-flow" more than reducing congestion by making it easy not to drive. The Salem River Crossing is of course their idee fixe.

The TAC will also be talking about:
You can download the agenda and meeting packet here.

I know you value accurate reporting and documentation, so to be clear the statement you added about SKATS' potential future comments to ODOT and the OTC ("At the moment they are likely to advocate for "highway expansion" and "free-flow" more than reducing congestion by making it easy not to drive.") was not at all mentioned in the agenda and are speculation on your part.

Regarding what projects SKATS has funded over time: the projects funded for the most recent 15 years are a balanced mix of project, and can be summarized in these categories:
* 23% bike and sidewalk projects (13 projects, including $500,000 for the Peter Courtney Minto Brown Bike/Ped bridge (to be topical))
* 21% intersection-related (combinations of road and signal projects, but include safety projects (like the Union @ Commercial signal that will help bicyclists/pedestrians connect to the future Union Street Family Friendly)
* 7% for ITS (Intelligent Transportation System program), mostly for Salem personal services for the Regional Traffic Control Center, but a little for signal interconnects
* 24% Planning Studies & MPO support
* 20% Transit (bus replacements, funding for Kiezer and South Salem transit centers, etc.)
* 5% Rideshare and Travel Demand Management (goes to newly re-named "Cherriots TripChoice" program)

Regarding the TDM - I've seen posts on this blog about TDM and advocating for more funds for this program. Both SKATS and ODOT have increased funding over the years to Cherriots TripChoice, and we currently provide about $700,000 per 2-year biennium (about $480,000 from SKATS, and $220,000 from ODOT). Cherriots TripChoice has staffed up, and is implementing their Strategic Plan. Should they feel they need additional funding/staff in future years we will discuss that at the time. Beside the funding, I know the staff at Cherriots are very committed and do a great job in their mission of encouraging and assisting people to use all mode options, whether that be carpool, vanpool, local transit, regional transit, biking and walking.

Submitted the following as a comment on the ODOT survey:

The ODOT mission should be changed to include the following:

And whereas, Oregon's transit systems and funding systematically denies full participation to all its residents, denying this fundamental right,

Therefore, as concerned residents and religious communities in Oregon, we call upon governments at every level to recognize the denial of this fundamental right to participate, and to direct public resources to ensure that all Oregon towns and cities offer residents a fully functional transit system that allows them the ability to participate fully in all aspects of life in this community without regard to economic status or ownership of an auto.