State Street Study has Consensus on Zoning, but not on the Street

The meeting summary and presentation boards for the State Street Open House last month have been out for a little while. There are no real surprises, but it might be worth visiting a few points. 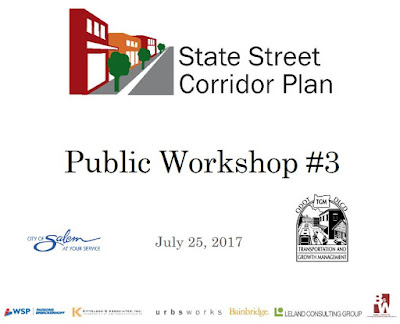 The summary of comments suggest there is the outline of a consensus on zoning, but not on a street redesign.

But before we talk about substantive matters, there is one tiny comment, buried deep in the summary, whose tone is arresting and which leaves me with the sinking, queasy feeling that it is a more dominant sentiment on the project than our polite society is usually willing to say:
Is that really the key to a lot of other criticism of the plan's concepts?

On more substantive details, let's talk about the street first. The summary notes "there does not appear to be broad consensus on the preferred street design alternative, the Hybrid alternative...many meeting participants prefer the Road Diet alternative."

Recently a report out of Austin on road diets has been making the rounds again, and it might have some useful data - though of course the opposition to road diets might be more affective than fact-based. The report is careful to say "right-sizing" not "road diet," it is worth noting. 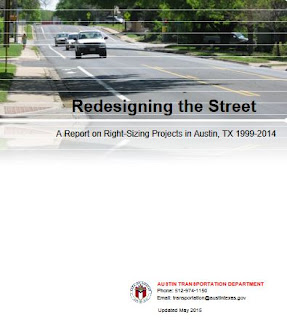 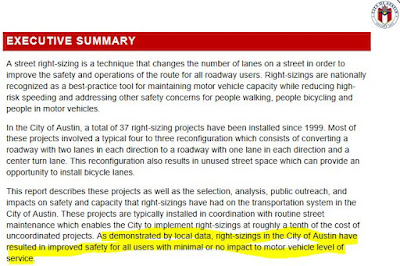 It studied 37 projects and concluded:


As demonstrated by local data, right-sizings in the City of Austin have resulted in improved safety for all users with minimal or no impact to motor vehicle level of service.

This is consistent with the Federal Highway Administration "myth buster" on road diets.

The State Street recommendations, though, are likely hamstrung in part by the project team's presentation.

There's nothing outrageous or anything in them, but they do seem a little biased. The main frame seems to be how to handle the bogeyman of cut-through traffic and traffic diversion rather than looking at how to improve the street for all users and owners.

The boards at the Open House presented the three main options for reconfiguring the street. The "improved" four-lane version seems unlikely to move forward, so that doesn't seem worth a comment. Few people like it.

The other two were listed in order of preference: The "Road Diet," and then the preferred "Hybrid."


The only item called out and circled on any of the boards is the negative one on the Road Diet option: "Most traffic diverted to parallel routes."

That seems like it rather deliberately stokes and plays to NIMBY fears of cut-through traffic! Of all the things they could really underscore, this is the one thing? That really seems like a leading question.

On the Hybrid option, "partial bike lanes" hides the fact that this proposal completes no gaps; instead, it maintains gaps in the system. It calls this a "toss-up," when it should be labeled instead negative - it fails to fix the problem of connectivity.

Even worse, it blithely labels a negative the "potential safety issues when bike lanes end." As if that was just something to note in passing, a minor detail.

When the bike lanes end.

How is it we are still in a place where it's acceptable to rebuild a major street without complete bike lanes?

So here we have a clear statement of City priorities.

Why is the City not pushing back against sentiments like these in favor of bicycle displacement systems:
A major street will be have important destinations people on bike might like to reach. As People for Bikes have said, "Bikes belong on main streets."


Historically, North American cities have placed their bike routes on side streets rather than main streets, forcing a problematic choice between comfort and convenience. This places an unintended emphasis on longer, faster commutes to work; when – with cycle tracks on corridors people want to visit – many more could be convinced to make the slow, short jaunt to the supermarket, cafe, or doctor’s office. In The Netherlands, cycling acts as an extension of walking rather than driving, with the vast majority of bike trips less than two miles or 20 minutes.

For people biking, the value of State Street isn't just that it is a direct route to downtown from east Salem. It is that, but we also hope it will be redeveloped with mixed uses and ground floor businesses that people in NEN and SENSA will want to visit on foot and on bike instead of getting into a car.

For auto traffic, the idea shouldn't be that a road redesign will shift car traffic from one route to another, as if it were a fixed quantity of fluid that needed to empty out somehow, but that a good redesign will induce shifts from short drive-alone trips to walking, biking, and busing trips.

The point of all this should be to reduce total auto traffic - to make it easier not to drive, especially for short trips.

The project still seems hampered by 20th century mobility standards and is not sufficiently forward thinking.

Land Use and Zoning

On the land use and zoning questions, the one persistent quibble seems to be with height:
It's hard to say how important height is for developers. Would dropping the maximum height also cap prospects for investment and redevelopment? Maybe there needs to be more visibility to the fiscal implications of reducing height maxima and ways that might indirectly inhibit the goals of the State Street study.

Additionally, the project team might talk more about street enclosure. The height maxima are mostly being discussed in terms of shadow along Court Street to the north, but what about the pleasant effects of height on State Street itself?

And, of course, car storage. What do we do about parking? Probably there's not enough talk about how required parking adds to the cost of housing and other development. (But of course commenters may not actually share the goal of redeveloping State Street, or want as little as possible done to it.)

The meeting summary is rather open-ended and indecisive, lacking a ringing conclusion or momentum for the proverbial "next steps." So it will be interesting to see what in fact are the next steps for the project.

(For all notes on the State Street Study see here. Previous notes on the Open House materials and recommendations here and here.)
Posted by Salem Breakfast on Bikes at 12:01 PM