The Budget Committee meets tonight and they'll hold a Public Hearing on the Capital Improvement Plan for 2019-2023. 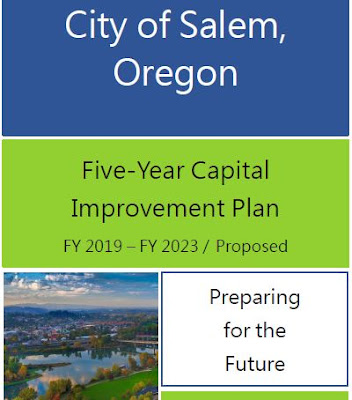 A draft proposed 2019 Capital Improvement Plan came out at the April 9th Council meeting, but there hasn't been much talk about it. Most of the decisions, too, were made long before the Strategic Plan was adopted. It will take a few cycles for everything to catch up and begin to work together.  On the CIP itself, I'm not sure the Budget Committee really has very much discretion. So the "public hearing" seems more for courtesy and to satisfy process than something intended to elicit substantive debate and analysis.

In the way it's organized, it's also hard to see the shape of underlying priorities and strategies, but maybe some things are visible.

Every year, Council and the Committee have an opportunity to talk more about ways we subsidize our roads from funding sources other than the gas tax, and auto user fees like licensing, registration, and titling. Funds associated with the valuation of property are a very large source and represent a transfer from home value to road value.

Because we are mostly committed to a program for "free" parking, we have to subsidize the maintenance of our parking garages from other sources. This is a systematic incentive for drive-alone trips and works against Cherriots. We we talk about City policies to support transit, we should be talking about ending our policies for free and subsidized parking. We should want instead to talk about redirecting more subsidy to support transit.

A very large chunk of the pie chart at top - 23% of it - is from a future TIGER grant from the Feds. It has not been very clear how competitive the McGilchrist project might have been under the old guidelines, and new guidelines, including a new name, are pushing the program to stress rural projects. The current bucket of funds just seems more like a "wish-list" than a credible set of sources at this point.

So that's a project on which the Committee might question the City - though it's not like there are funds from it that should be redirected to other projects.

And that's the thing about most of the projects in the CIP. They have already been vetted through other processes, many have funds committed from other sources, and so it's not like the Budget Committee could very easily say, "no this doesn't fit our priorities, let's redirect these funds." Most of the funding is actually pretty locked in.

Still, here's an area that should get more questions. The far southeastern quadrant of the city is getting lots of investment, but it's not at all clear that it will have multi-generational enduring value beyond the shiny and new phase of its first life cycle. Sanyo Solar went bust, the Amazon big box model does not seem likely to last decades, and almost all the investment and subsidy here just seems so transitory. (Agriculture and food processing might be the big exception, as we have structural advantages that are not easily portable. The other industries can just pack up and leave.)

These projects include
Another group are for new connections or capacity on busy streets
Even though this is a "Capital" projects list, there's a chunk of projects that are ambiguous, and under a different budget and funding scheme, we might consider them part of on-going maintenance rather than capital projects. This is a sign of our system problem with maintenance.
Then there is a group of projects that are either directly to improve walking, biking, and safety, or have a significant component that will offer these benefits. The only one that from here is a little murky is the plan for $1.5 million on Wallace Road along Second Street. There's no plan yet, and there's a risk the City's just throwing money at a problem without knowing much about a real solution.
Finally, there's the bridge out south on Lone Oak. Until the City figures out the Reimbursement District, this is an incoherent mess. Maybe this should be taken out of the CIP completely until the Reimbursement District is legally settled or some other solution is developed and accepted.

So here are the questions or assertions that seem reasonable from here:
The Committee meets tonight, Wednesday the 25th, at 6pm in Council Chambers at City Hall.
Posted by Salem Breakfast on Bikes at 12:01 PM

Email ThisBlogThis!Share to TwitterShare to FacebookShare to Pinterest
Labels: CIP

In the Parks section of the CIP there's a couple more projects that are worth noting:

$70,000 for "City Center Park and Trail Master Plan" which involves SCAN and CANDO - sounds like Bush Park and Riverfront Park, and points in between.

(Edit: Elsewhere a reader rightly asked what is "the stream of mystery"? That link was missing! But now it's included. Sorry about that.)