Not long after Council adjourned last night, the paper published a relatively lengthy piece on action for the Winter-Maple Family-Friendly Bikeway - or maybe now, the Winter-Maple Bicycle and Pedestrian Plan. 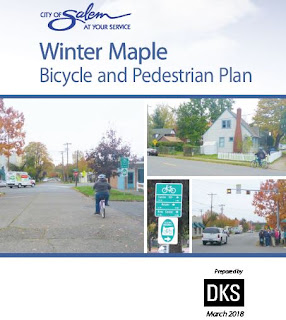 One of the interesting things to come out of it is the role just of language.

From the paper's early story:


The Salem City Council on Monday approved a plan to construct a bike and pedestrian path connecting the Capitol Mall and Salem Parkway areas.

The decision followed a debate over whether to include last-minute additions proponents expect will slow traffic near the Oregon School for the Deaf.

The bike and pedestrian path, called Winter-Maple Neighborhood Greenway, doesn't appear to have a confirmed completion date, but Monday's decision paves the way for city officials to start early work on the project.

It's hard to say whether this use of "path" is a misunderstanding of the nature of the plan and the nature of low-traffic bikeways, which would be understandable since the piece was published last night, or whether it represents autoist bias and a back-handed denial of bike traffic in the street itself.

By contrast, Salem Bike Boulevard Advocates note that the approval included "a Neighborhood Greenway designation (so as to align with the national leaders in bike boulevards)."

Maybe this will just take a while to shake out. But it also suggests something potentially of bikelash and the "street fight" as former New York City transportation chief Janette Sadik-Khan says.

As we have seen with advocacy for the Salem River Crossing, "bicycle warriors" and "they want to force us out of our cars" are frequent tropes and insults. After a period when it had seemed multi-modal planning was on the rise here in Salem, bicycling and provisions for people who bike are again more hotly contested it seems.


A HUGE thank you to Mayor Bennett and Councilors Kaser, Andersen, McCoid, Ausec, Hoy, and Cook for their votes to adopt the Winter-Maple Bicycle and Pedestrian Plan at last night’s City Council Meeting!....

Supporters can email their Councilor to thank them for their commitment to active transportation for all ages and abilities and encourage the City to make this plan a reality – sooner than later.

The paper has the flip side, and it's hard not to read into this the way debate on the SRC has polarized auto speed and bicycling - we can't slow the cars!


Councilman Jim Lewis could not support the changes. "My concern about stop signs everywhere is that at some point, we interfere with the movement of others that are in their cars — and it starts to get to the point where it seems like punishment."

Lewis instead proposed adopting the original plan without the new changes, but only found Councilman Brad Nanke as a supporter. Nanke raised concerns about setting the speed limit at 20 miles per hour all the time, though he said, "I would support a 20 mile an hour when children are present."

When it came time to decide on the changes introduced by Andersen and Kaser, all but Nanke and Lewis voted in favor of them. 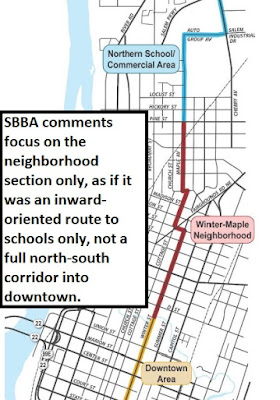 Those changes, as SBBA notes, are in the neighborhood section, and there is still much to do in the downtown section and the Auto Group/Cherry Avenue sections:
In order to realize the plan completely, we are going to have to talk about on-street parking, and this seems very difficult at the moment. There will be trade-offs, and it may not be possible to have full kumbaya on the process. We will have to get to a point where formally the City is more willing to engage in a critique of autoism and a willingness to provide capacity increase for total people on a street without also adding capacity for drive-alone trips - and sometimes even diminishing capacity for drive-alone trips.

Approval of the Plan is a great first step, but there is much yet to do for the full bikeway and even more for a truly multi-modal approach to city mobility and congestion.

As SBBA suggests, thanking your Councilor for the decision, or if Councilors Nanke and Lewis are your Councilor telling them that you disagree, also lets them know about the extent of support for further change. (Maybe drop a note too about 350.org's proposal for Council to support greenhouse gas reduction in the RTSP!)
Posted by Salem Breakfast on Bikes at 12:01 PM

Some years ago there was an effort to convert the old Geer railroad line to a bike trail. It ran from Silverton to Dallas. The plan fizzled due to many factors, but a big one was the closing of the underpass at I-5. However, remnants of the old railroad right of way still exists. I was wondering if anyone has looked into how it might be used to create a bike corridor.

In the area of Geer Park there is some vacant land that goes up to State Street past the prison, gets obscured for s short ways, but then it is seen as Simpson Street near 25th and can be traced all the way to 12th Street. If connected to Union Street it could then continue all the way to West Salem.

On the other side of I-5, the abandoned railroad still runs through the neighborhoods of County part of the East Salem Area to Cordon Road and beyond. I think it still goes to Silverton.