From here of course Monday's Council meeting is dominated by the Winter-Maple Bikeway. But there are several other things to note in passing, and some totally deserve more comment and analysis. There's a lot of meat on this agenda.

One project, an important project, is the West Salem Code Clean-up for the close-in Edgewater area. I don't feel like it has got quite enough attention. Council looks to set a date for a Public Hearing on it later this month. (And there may be more to say then.)

Some good news? At least theoretically, a full build-out with the new zoning would decrease car trips!

The memo's not included in the full packet, so maybe this is a little obscure. But, hey, if the traffic modeling projects a decrease, that's good news.

It looks like the plan rationalizes off-street parking a little, but it does not remove minimums and fully let the market determine the amount. That's a disappointment, but the plan would offer incremental improvement. (Ordinary standards for multi-family housing are 1.5 stalls per unit, but in a couple of places, including here, the City uses 1.0 stall per unit, so that's a 33% reduction from the usual, I guess you could say.)

There was also talk at one point about street standards and maybe allowing narrower streets in the area between Wallace Road and Wallace Marine Park.

Maybe there will be more to say on this when the Staff Report for the Public Hearing is published. The ordinance bill is 130+ pages, and that'll take some time to wade through if they do not write more of a summary analysis. The project page does not have very good summary discussions of each round of changes. If you aren't following things closely (and I'm not), it's difficult to understand how the proposed zoning has evolved and responded to public comment. The process and summaries could still be more friendly and informative for the general public.

There's an update on the sidewalk rehabilitation program. ADA mitigation is really driving it right now:


After numerous recruiting efforts, we have now filled the positions on our two-person Sidewalk Response Team. This new team is responding to locations selected within our established neighborhoods that present barriers to mobility, have suffered a trip and fall complaint, have an appending ADA complaint, as per the response policy adopted by Council in 2014....

The Sidewalk Rehabilitation Team is still focused on the Court-Chemeketa Historic District per Council’s directive and, once completed, will return to finish the Gerth Street NW and Edgewater Street NW corridors. The team will then focus on rehabilitating sidewalks and curb ramps adjacent to identified priority ADA routes throughout our community....Once these priorities are complete, we anticipate returning to the original pattern of rehabilitating sidewalks in a spiral pattern outward through our neighborhoods.

Council is allocating $1M/year to the project.

The nursing home project at the Boise Redevelopment is delayed again.


Due to ongoing site condition issues from an existing retaining wall, project construction has been delayed and will not be complete by the contractual deadlines.

The south property boundary adjacent to the retaining wall and the creek parcel presents a challenging construction environment that requires collaboration between the City and the Developer on construction methods and phasing. There are multiple interrelated and phased projects in this vicinity, including City projects that consist of removing the concrete cap spanning the creek, creek bank restoration and stability improvements, and the future construction of a trail along the improved bank. Some of the City’s work also requires regulatory review and permitting to work in the creek during the in-water work period. There are also Developer improvements to be constructed in the same general vicinity, including site work, excavation, and construction of their post-acute rehab facility. The Developer’s project has been delayed, in part, by internal business factors as well as their redesign efforts to address complicated site conditions and develop less costly solutions.

It benefits the City to extend the Agreement in that removing of the concrete structure over the creek, which can occur from the right-of-way if needed, will be a simpler and less costly process if construction access can occur across the Developer’s site prior to construction of Developer’s Project. Extending this agreement will allow ongoing collaboration on project phasing and construction methods for these various projects.

The news about "removing the concrete cap" was new. Since it does not appear that the path on the south side of the creek will ever be public, a connection across the creek may not be necessary. Considering the significance of a path connection between Mirror Pond and Riverfront Park, the negotiations and process on this has been opaque, and the City should say more about where things are and what they hope to do.

The Floodplain Management Plan definitely deserves a closer look, and maybe someone else will do that. Some quick hits, then.

Areas with repeated flood claims, "repetitive loss areas" as they are called:
And here's a table of Critical Transportation Corridors Affected by Flooding. 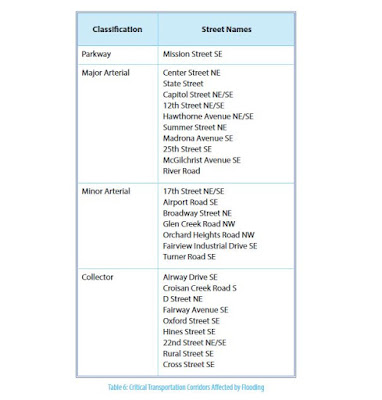 From the Economic Development report:


According to building permit data from the City of Salem Community Development Department, there have been 372 permits issued this quarter with a valuation of $100,062,650, including 25 new commercial/industrial permits. Vacancy rates continue to decline for all sectors in the Salem area. From 2014-2017 office vacancy rates declined from 9 percent to 6 percent with rents increasing steadily. Vacancy rates for retail uses declined in that same period from 4.7 percent to 3.4 percent. Industrial vacancy rates remain very low and pricing continues to rise. The industrial vacancy rate in Salem is approximately 1.7 percent, compared with Portland’s 4 percent. Industrial building rates continue to rise, and have increased from $5 per square foot last year to $7.50 per square foot....

Two grants totaling $366,520 were awarded to businesses within the North Gateway Urban Renewal Area which leveraged private investment of $733,040. Additionally, four grants totaling $287,303 went to businesses within the Riverfront-Downtown URA and leveraged private investment of $992,019. Notably, several downtown properties have been purchased since the beginning of the year, and corresponding grant applications are anticipated to partially fund renovations and redevelopment.