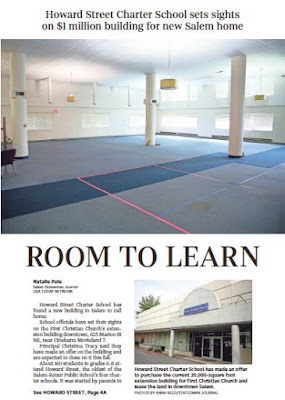 You know we have a thing for old grocery stores here, and it was a nice surprise to see the front page story about a serious plan for relocating Howard Street Charter School to an old grocery store downtown. The building is identified as "First Christian Church’s extension building," but long before the Department of Energy used it, it was a QFC Quality Food Market. Maybe it operated under other names, too. (We may come back to more on this!) The site is near the transit mall, and is more centrally located, and would add a chunk of weekday activity to this often quiet edge of downtown. Maybe housing or a different for-profit enterprise would still be a higher use, but even a non-profit school seems like a decent use also. 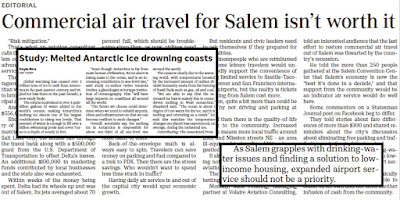 Earlier in the week there was an editorial about commercial air service, and while it identified bigger problems we need to work on and fund, it missed a big one: If we are serious about reducing greenhouse gas emissions, we will have to reduce our use of jets and air travel. 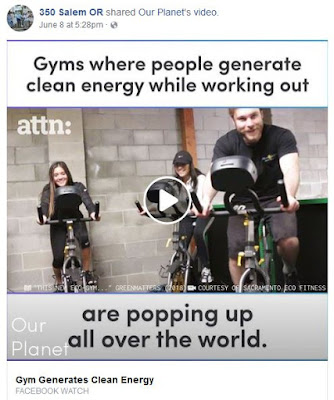 This clip was making the rounds last week, and something's missing, isn't it? How did those people spinning "clean energy" first get to the gym? The probably drove cars. Maybe they were electric, but probably they were still internal combustion. And even if they were electric cars, does this spinning actually generate more than the energy consumed during travel to and from the gym? This clean energy generation at the gym looks more like greenwash and scam than something actually useful. Instead of spinning clean energy at the gym, ride your bike to work, for errands, for socializing and other travel. 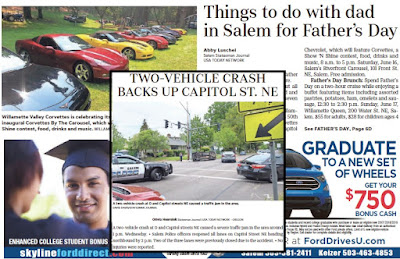 On another day, there was also a piece about Father's Day, an ad that appealed to new graduates, and a notice about a crash. The way we have positioned this consumer good as a milestone and sign of status in the good life conceals how dangerous and costly it is.

Earlier this year, BikePortland had a piece on the size of the auto-industrial complex:


How can Oregon make progress in its fight against car abuse when cars represent one of the largest sectors of our state’s economy?

It feels good for Oregon bicycle advocates to talk about “bikenomics,” but the truth hurts: our state’s auto industry is a behemoth that casts a very long shadow. According to an article published Sunday in the Portland Tribune, there was $10.6 billion in new vehicle sales in 2016 (the latest year figures are available). That amounts to a whopping 17.9 percent of all retail sales statewide.

As long as media are so dependent on car advertising, it's not likely we'll get a fully critical appraisal of cars, roads, and safety. There may not be much to do about this.

And here is an ad for what might be the first store that operated there, one of the McKay Markets. (And, Update 2: Berg Supermarket was in fact the first store, not McKay, and the history was contested and interesting!)

I should add that even though the grocery store has an address on Marion Street, it's really more on the corner of Church and Union. With the forthcoming Union Street bikeway, the forthcoming Winter-Maple bikeway, and the new partial bike lanes on High Street downtown, the proposed Howard Street Charter School site is positioned to benefit from what are by Salem standards high quality connections for walking and biking. It should be realistically possible for some students to travel to and from school under their own power.

Edit: A reader sends in a correction. It was a "Quality Food Market" not QFC!

Also, The Chain Gang: One Newspaper Versus the Gannett Empire references it in a discussion of "Operation Demolish," apparently a Salem project to kill advertising in a competing weekly, Community Press.

The real opportunity for using stationary bikes with generator hookups is in schools — EVERY School should have five or six for use as part of an energy literacy curriculum because there is nothing like physical learning to make energy units real and to teach (wordlessly) about just how incredibly wasteful auto-mobility is. They can be used in PE and by athletic teams for training, but they would also advance a more important curriculum of energy awareness and literacy.

A top world-class athlete can do maybe 250w on a bike for an hour; the average one of us would be doing good to keep a 100w load powered continuously for an hour.

If every kid got repeated exposures throughout their school years to just how much work is needed to power the devices of life and if teachers were taught how to integrate understanding of energy into the curriculum (in every class, not just science, but also especially social studies and history, biology, health, and art and writing as well), kids would be able to grasp at a gut (muscle) level what it means to burn a gallon of gas on a foolish errand. (It would take teams of riders WEEKS on the stationary bikes to generate the same energy as is used in burning a gallon of gas.)

More prosaically, I’ve long thought that many of the most intractable problems of society would improve greatly if all televisions were bike-powered or not operable at all. The mental and physical health and fitness of the young (and some olds) would improve dramatically.

That direct lesson in physics-work-energy (as opposed to capitalist wage labor work) would indeed be useful!

Finally, found an ad for what might be the very first store that operated in the grocery store building, an ad for McKay Market downtown in 1960.

Here's a much better history of the grocery store. Bergs supermarket was its name at construction, and it appears McKay was the second. Quality Food was a couple of brands/owners later.