The Sunday paper's full of interesting things this morning! So we'll ramble through a few notes on some of them.

In a piece about the proclamation at Council for the Salem Brewery District, there's a terrific note about walking and biking.

"We want people to feel safe and be safe when they are walking or biking between locations."

Is this the first time in Salem a group of businesses have unambiguously and enthusiastically called for non-auto improvements on a major road?

This feels like a shift in the conversation, and it's great to see.


There's also lots of local history and local branding here in the ways local brewers are nodding to the past.

It happens that quite a number of the early brewers, saloon operators, and important businessmen were from Alsace. Maurice Klinger, Seraphin Beck, and Eugene Eckerlen were all immigrants from Alsace. Klinger and Eckerlen also erected buildings downtown, but Eckerlen is the only one with a building still standing. (The City missed the opportunity for Eckerlen Alley!)

Another important Alsatian was in lumber. The history column talks about one of the Gerlingers and it may be that there is room for a much larger treatment of the role of Alsatians in the development of Salem's downtown and economy. ("Immigrants get the job done"?) 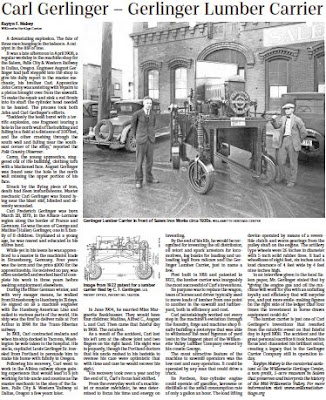 Less happy to note is a Letter to the Editor promoting the industry-sponsored TNC deregulation bill.


Thanks to grant funding from Oregon Impact, the Salem Police Department was able to conduct a specialized patrol shift during the month of April to focus on the very dangerous issue of driving while impaired.

In March and April, the combined focused enforcement efforts through the grant and by the overall agency resulted in the following:

But Oregon Impact apparently remains bound by autoism and can't see that they should be advocating for a total reduction in driving. Rather than promoting transit and parking reductions, they are supporting the end-run on local TNC regulations.

TNCs increase miles driven and carbon pollution by a substantial amount, they operate by exploiting drivers and extracting value from them, and we should not let our regulatory schemes be captured by the industry.

This is a disappointing move by safety advocates.

And it stands in contrast with the Salem brewers who are more responsibly and sustainably advocating for safe non-auto transportation.

One thing the brewers might consider is ensuring that they are pressing the City for the best possible project, and not simply being used by the City to shore up a weaker project that relies on out-dated standards for bike lanes.

Back on November 2017, the McGilchrist concept used vintage 1980s style bike lanes rather than protected bike lanes, and with the truck traffic and the signed speed for 40mph, plain old bike lanes are not good enough.

(Added McGilchrist concept and NACTO clip, along with additional comment)

Agree with opinion on need for protected bike facilities. The city has done them downtown and will have them on south Commercial Street and some other locations. Who is the councilor for the McGilchrist area?

Councilor Tom Andersen, who routinely bikes to Council and for other business and recreation! Contact info here.