Public Process at the MPO: SKATS

The Policy Committee for our local Metropolitan Planning Organization meets today, Tuesday the 25th, and one item is a discussion of the project vetting for 2021-2026 funding. In it is a four-page memo on the "outreach plan." It looks pretty robust.

And yet, as we just saw with the RTSP, the MPO is not always interested in responding substantively to informed public comment.

This is not unusual. City Council, the State Legislature, all policy-making bodies struggle with popular things that are bad or false or problematic, and unpopular things that are true or necessary or valuable. They struggle with vocal minority opinion that leverages power to foil change, or with majority opinion that moves towards tyranny. These are perennial questions.

Even so, at this moment, the interesting question for the MPO may not really be, "how do we get more public involvement?"

More interesting questions for the MPO should be, "how do we authentically engage public comment when it runs against our wishes?" and "what if we are wrong?"

The process we have is more procedural than substantive, and this may be the best we can do. But too often the result is a Potemkin process.

There's a long memo on the history of the proposal for a South Salem Transit Center. 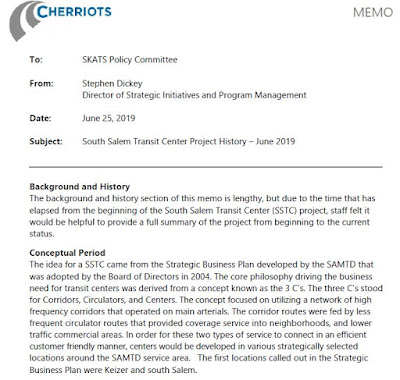 It rehearsed information that's already out there, and did not seem to reveal very much new. But if you are interested on the history, it might be worth a read to see it from Cherriots' perspective all in one place.

A couple of bureaucratic and technical items,"rebalanc[ing] the STIP to fund projects at the appropriate levels due to market changes in the economy, good business decisions, and/or re-evaluating the scope and estimates for projects" and "setting targets on the obligation rate of each MPO’s federal transportation funds," do not seem important here.

Though in them there is news that a project on "access control" on Doaks Ferry at  Highway 22 - which may have changed, but at one time involved going through the historic town and street grid of Eola to use Riggs St - now has some additional funding for ADA requirements. (See notes from 2014 and 2017.) This is a part of town that is hostile to walking and biking, and it will be interesting to learn what all is involved here.

There are also notes on ODOT projects busting budgets. The Wallace Road paving project from Michigan City Lane to Edgewater is increasing from $6.3 million  to $9.9 million and the OR-22 paving project out by Aumsville from Joseph Street to Golf Club Road is increasing from $4.5 million to $6.7 million. In round terms, both projects are at 150% of the previous budget. This is another reminder that the City's luck on the 2008 Road Bond projects was not primarily cleverness and thrift, but was mainly a product of the Great Recession. The normal pattern, especially for large projects at ODOT, is for big overage. That's why estimates for things like the SRC are highly suspect and nearly certain to be wildly underestimated.

And there is a letter supporting the City's application for a BUILD grant on McGilchrist. It remains to be seen how competitive is the proposal. Additionally, if Salem ever won a grant, it is plausible that the BUILD program's goals no longer align with urban best practices and that this might distort the project's implementation. The predecessor, TIGER, was aimed at innovation and 21st century practices, but the current administration is oriented towards nostalgia for the 20th century and its autoism. It's possible that funding through the BUILD program would ensure a suboptimal outcome, and that winning might be a bit of a Pyrrhic victory. (See notes from 2017, 2018 and here, and this year.)

Because of ongoing construction, the MPO has been meeting elsewhere. For this meeting they are at MPO-HQ, but there will be a maze and test! MPO Staff write:


This meeting is, as usual, open to the public. Please be aware that, due to construction, the elevator at the COG offices will not be available without special arrangement, but the stairs from the State Street door between Table Five 08 and O'Sushi will be available. If you need the elevator, please let Lori Moore (503-540-1609 or lomoore@mwvcog.org) know as soon as possible so arrangements can be made.

The Feds announced the 2019 round of BUILD grant awards, and the only one in Oregon is an arterial widening (2 to 4 lanes) in Medford that secured $15.5M on a $39M project.