Yesterday a letter from the Governor was making the rounds among transportation advocates. 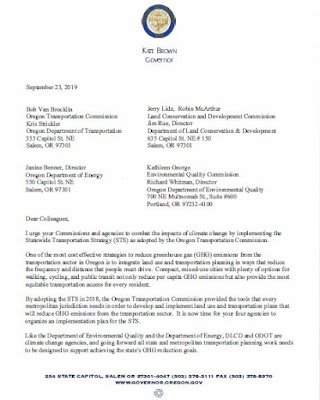 
to combat the impacts of climate change by implementing the Statewide Transportation Strategy (STS) as adopted by the Oregon Transportation Commission....

It is now time for your four agencies to organize an implementation plan for the STS.

In the last report to the Legislature, the Oregon Global Warming Commission noted that "STS adoption is only advisory and has no specific programmatic implications...."

It has not been much implemented since 2013.

It is not, therefore, clear how effective this "urging" might be, even with admonishment of "it is now time." It could just be virtue signalling in response to the Climate Strike rallies of last weekend.

As initially structured in the STS, the short-term recommendations are merely variations on "business as usual" and themselves mainly signalling rather than action. Nowhere is there anything about "drive Less" or "no new capacity." It's all about maintaining current patterns of autoism with a light greenwash from electrification and technology.


So I don't know. Maybe this will be a cusp and the start of a major change in course. But as the STS is written, it does not seem very powerful. The nominated new Director of ODOT is a "stay the course" figure, and not a transformational one. Things do not seem to be aligned for real change.

In her letter, the Governor did include four bullets of more specific recommendation, and at least indirectly she may be aiming at the greenwashy and wishy-washy elements of the STS as written.

Her letter is another avenue for comment to SKATS to remind them again and again, that the MPO needs to adopt greenhouse gas reduction goals, to include these goals in high-level plan documents, and to use these goals in project evaluation, project funding selection, and transportation planning.

This is something to watch, and something for advocates to press ODOT, SKATS, and the City of Salem on.

(For more on the STS, see the State's site here.)
Posted by Salem Breakfast on Bikes at 10:00 AM

I forgot that earlier this year, as HB 2020 was getting bogged down, media reported that "Gov. Kate Brown Says She Is Prepared to Use Executive Powers to Push Carbon Cap Legislation."

So maybe the best lens for this letter is that exercise of Executive Power.

It's still not clear how binding it is and how effective it will be.