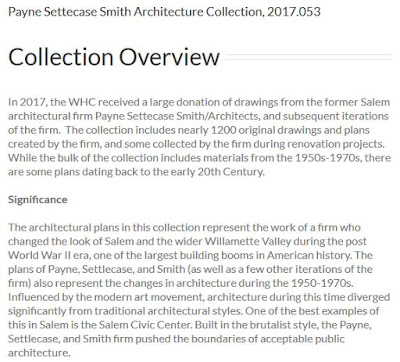 You might not have noticed, but a couple months back The Mill announced that they'd processed a recent donation, drawings and papers from Payne Settecase Smith Architects.

About it they said


The architectural plans in this collection represent the work of a firm who changed the look of Salem and the wider Willamette Valley during the post World War II era, one of the largest building booms in American history...[They] also represent the changes in architecture during the 1950-1970s. Influenced by the modern art movement, architecture during this time diverged significantly from traditional architectural styles. One of the best examples of this in Salem is the Salem Civic Center. Built in the brutalist style, the Payne, Settlecase, and Smith firm pushed the boundaries of acceptable public architecture.

One of the Principals, Howard Smith, died last week.

We should also have a more public list of buildings they were involved in. In a way similar to the slate of commissions CB|Two has and is having now, the permutations of Payne Settecase Smith as a firm dominated that previous generation of design work in Salem, and we should have a better understanding of its virtues and its weaknesses. As we consider the built environment, consider climate and what is a good urban life, we should want more of an understanding of the architecture of mid-century autoism here, what it responded to, what were its crucial concessions, what were its aspirations, those foiled and those realized.

A firm that may be a successor to Payne Settecase Smith, Anderson Shirley, is in one of Salem's interesting mid-century modern things across the street from the Library. It would be good to learn whether it is a Payne Settecase Smith design. The modernist buildings executed during that 1950-70 period are becoming eligible for listing on the National Register, and this prompts consideration of the more general question of preservation, as some of them reach the end of their life cycle and need significant renovation or may face demolition.
Posted by Salem Breakfast on Bikes at 8:30 AM

Email ThisBlogThis!Share to TwitterShare to FacebookShare to Pinterest
Labels: Our Libraries