Though today they wouldn't be let inside the fencing of a demolition project, male students with hammers and crowbars were the primary labor for the demolition of old Lausanne Hall 100 years ago on Willamette University's campus.

On October 19th, 1919, Salemites got their first public view of the design for the new Lausanne Hall.


The new Lausanne Hall, beautiful structure which will be constructed on campus of Willamette University to serve as young women's dormitory. The cost will be $80,000, most of which has been raised. Donors of $500 or more have the privilege of naming rooms, and girls taking rooms for four-year period may have them decorated as they please. Fire danger in minimized by interior design or architect. Even the basement of this building presents interesting features....The heating plant will be one of the most modern obtainable. The boiler will be enclosed in a separate fireproof room...[with] automatic sliding doors...There will be a fully equipped laundry in the basement...A gymnasium will be installed in the basement for calesthenic exercises.

Though the link to Chloe and William Willson always is background to the story of Old Lausanne, this notice gives a smaller link to the sad history of Senator Baker, killed during the Civil War.

The original site for the house on the corner of Capital and Court is probably where the modernist gas station and parking lot is today.

Students led the demolition, but it was predictably gendered: "All the boys of the school will report for duty...armed with hammers, hatchets, axes, saws, crowbars, and any kind of weapon for ripping off boards. The girls are to co-operate by preparing a student feed."

For more on Lausanne Hall, see this 2016 article on the Hatfield Library blog, the note at shineonsalem blog, and particular stories on the transition in the 1919 Willamette Collegian from October 15th and October 22nd.

The paper's got a piece about the construction and also about Deaconess Hospital. (The captions are reversed, however.) 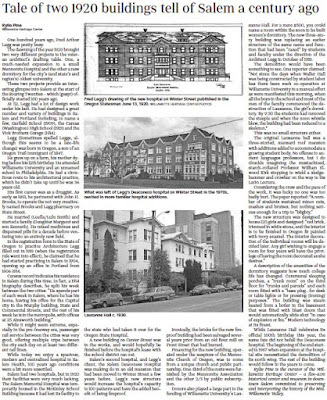 (Added from the Willamette University Archives a picture of the demolition in progress.)