The long-awaited crosswalk on Commercial Street SE at Royvonne opens today at 5:55pm with a dedication by the Mayor and a safety demonstration led by Shatamera Pruden's mother, Elizabeth Pruden.

There's a moving front page article today and it's worth reading in full. It's also a little infuriating. 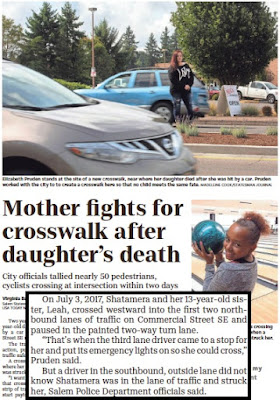 The piece focuses on a mother's advocacy, but it also dwells on the roadblocks she found.

One of them is the way we subordinate people on foot to businesses and car traffic:


Salem traffic engineer Kevin Hottmann suggested [Elizabeth] Pruden visit a number of local businesses near the intersection and ask them to write letters urging the city to establish a crosswalk.

Like the death and circumstances aren't enough? Even if the businesses fought it - and they will in other places - we should insist on better safety for people who aren't traveling by car. We should not be so solicitous about getting "permission" from nearby businesses for safety improvements! This is a politics of safety we need to get past.

The piece also notes that Shatamera, who apparently lived east of Commercial Street, "mostly met up with friends at nearby Woodmansee Park."

This is clear evidence that part of the Safe Routes project for Woodmansee Park, which has seemed like it was focusing on internal or boundary connections, should also include more discussion of Commercial Street as a barrier.

A safety demonstration will follow the dedication. Elizabeth Pruden is


inviting attendees to bring signs to display at the intersection with catchy phrases like, “I like drivers that take it slow” and “Ignore your phone so we can all make it home.”

But we also need to consider not just individual choices about compliance and care, but also system changes.
Signed for 40mph, Commercial Street here is systematically structured for lethal collisions after nearly any error by driver or person on foot.

Until we grapple more deeply with our need for speed, our crosswalk program will be hampered, and offer smaller increments of improvement in safety than we could achieve with reductions in urban speed.

The crosswalk here will be helpful, but it is layered on top of a stroad that is still structured for autoist priority, and there is more to do.

(See previous notes on the intersection and crash here, here, and here.) 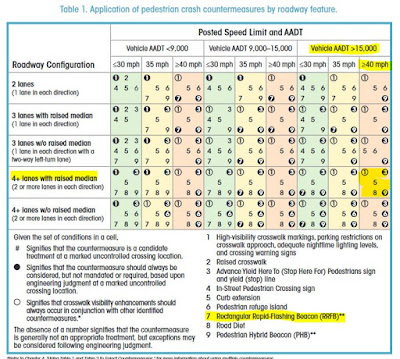 Consistent with what GreenDrake says in the comments, a this kind of flashing beacon does not seem to be recommended for crossings with a 40mph posted speed. It recommends instead a form of beacon that has overhead lights and stop bars painted in the street. I'm not sure it's clear cut to say the installation here is straight-up wrong, but it may very well be underpowered by current design standards (which are themselves conservative and autoist). Our installation then may be stretching a use in the same way the City stretched the use of sharrows to paint them on Commercial Street downtown.
Posted by Salem Breakfast on Bikes at 8:30 AM

The SJ article does not seem to be online yet, and the City's website and FB don't seem to have any news on the crosswalk dedication, either. So for an event involving the Mayor, there's an odd lack of notification circulating around it. If things are posted/published later in the day, this post may be updated.

Most of the USDOT guidelines for use of RRFBs seem to indicate they are for use where speed limits are below 40 MPH so I am a bit puzzled about why the limit hasn't been reduced in this section of Commercial.

Not to be too much of a stickler for terminology -- this is not a new crosswalk. There are crosswalks at every intersection, regardless of whether they are marked or not and motorists are obligated to yield to pedestrians who are in those crosswalks. Certainly, the marking of this crosswalks and the enhanced safety measures are commendable. It is very unfortunate that somebody has to die in order for ODOT and the city to take these kinds of actions.

Added clip to flesh out GreenDrake's point. I did not know this about the guidelines for this kind of beacon, and this is good to know.