The latest community satisfaction survey is out, published on the council agenda, and homelessness continues to be the top concern. The numbers on many other issues fall within the margin of error, and several could even round to zero. On walking and biking the survey does not seem to be constructed in a way to generate meaningful results that are actually useful.


The fact that people who may not walk or bike are nonetheless asked how they feel about walking and biking renders at least some of the satisfaction levels rather suspect. Probably there are lots of people who don't walk or bike and feel that the City meets the need. "Look at all the bike lanes!"  they might say. So the conclusion here on "room for improvement" is nearly certain to underestimate things badly. If we have a bike commute rate that is less than 1%, it's hard to believe 56% are satisfied with safety and 61% think it easy for people biking in Salem. There's a disconnect between what people say and what they do, and these results just don't add up. 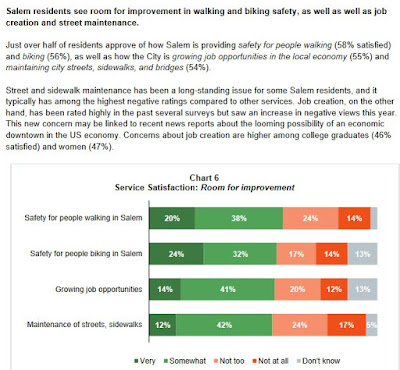 For comparison, here are the indicators from Our Salem. The survey results and Our Salem indicators do not align, and the City should give more consideration to this disjunction.

Between margin of error and survey construction, it does not seem useful to try to squeeze too much meaning out of the results. Maybe you will see something significant, but mostly these are talking points and propaganda, not analytically firm conclusions. An overall decline in satisfaction might also be more an artifact of our looming Constitutional crisis and national politics, a general increase in doomy feelings, and less anything particular to the City of Salem. It's just not a tightly crafted survey.

Here's the four year detail on "in Salem is walking/biking easy/difficult?"

It's hard to know how to interpret this. In the three previous years, walking and biking were asked about together. And in those years the "very easy" proportion swung wildly, from 40% to 31% and back to 48%. This year "very easy" walking was back down to 30% and "very easy" biking down to 20%. On the flip side, the "very difficult" numbers jumped from 6%-5%-3% to 11% and 12% It seems like there's a lot of noise in those numbers.
Posted by Salem Breakfast on Bikes at 12:01 PM

(Added a little more on the walk & bike questions.)