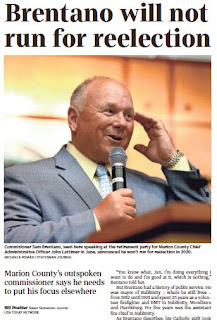 On the heels of Congressman Walden's announcement he will not seek re-election comes today's news that Marion County Commissioner Sam Brentano will retire from the Commission.

Ordinarily the political horse race and individual candidates are not the subject here. But Brentano has been a revanchist foe of climate action and reactionary booster for mid-century autoism.

At the MPO he has retarded progress in many areas, and replacing him on the Policy Committee will be helpful, even if that replacement is one of the existing Commissioners and not anyone new who is elected to the Commission seat in his place.

More generally it's a chance to pick up a rational voice at the County. An uphill climb to be sure, but a worthwhile project. If politics is your thing, and you were looking for an advocacy project, consider working on a campaign for a replacement who values climate action and non-auto transport.

(Comments are off on this post.)
Posted by Salem Breakfast on Bikes at 8:00 AM