Council meets on Monday and they'll be considering a modern Vagrancy Law.

CANDO has the best notes and critical analysis, so be sure to read what they have to say, most recently a close reading of the Council Work Session last week, and a new piece on disability and the proposed law.

I have nothing to add the debate, but I want to talk about optics and visual rhetoric. Bikes are neutral transportation technology. Rich people and poor people both use them. But they have advantages: They are cheaper than a car, portable, and easily obtained and repaired. They travel on roads, sidewalks, and paths. They can also stolen, chopped, and sold or bartered. They can be put to good ends and bad ends.

It is a little concerning that in the imagery around people who lack housing, we code bicycles as inherently juvenile, inherently sketchy, only something poor people or bad people use.

In the piece for today's story about students who lack housing, there's a random bike, not anything that corresponds to any detail or person in the story, but a more general "illustration" of homelessness. Its narrative function is only to code bikes as something associated with homelessness.

This serves autoist interests by aligning bike use with misfortune, and paints bikes as an emblem of misfortune or poor judgment that people not only can read, but should read. It stigmatizes bike use. It also reinforces the signalling function of cars and car use: Cars signify a certain class, respectability, and wealth.

But we should remember that if there is a transportation technology that deserves stigma, it is our autoism, our overuse of cars.

About the other things there is not much to say, so bullets:

Some interesting land use matters:
There are a couple of acquisitions for future road work:
And other items:
Update, Monday 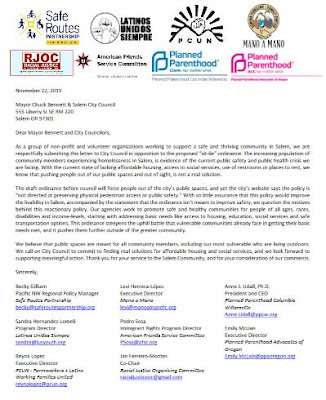 The Safe Routes to School Partnership yesterday announced they'd joined a coalition against the Vagrancy Law and submitted formal comment. I think this is the first time they've commented in Salem in the context of a broader conception of public space and travel, not just the narrower question of better sidewalks and crosswalks for kids. Something to watch.
Posted by Salem Breakfast on Bikes at 10:00 AM

WSNA at a recent meeting has taken the position that they want no more development in West Salem until they get a bridge. So, they plan to appeal every project. It is not a good strategy, but they hope to get someone's attention with this strategy. There is a group of people who are even planning to appeal a recent proposal out on Doaks Ferry all the way to LUBA and beyond. Lots of NYMBYs in that group.

The Riverbend project seems like a pretty good project where many trees were saved and it is a mixed use project with offices, businesses and housing.

Some people are just never happy, I guess.

Forgot to note the SR2S letter on MOnday. Thanks also for the heads-up on appealmania in West Salem.