Ride of Silence & News Round Up

First thing's quiet & contemplative. Take a moment to honor those killed and hurt while bicycling. The Salem Ride of Silence will commence at the Red Lot at 6pm on Wednesday, May 20th.

The Ride of Silence is a world-wide event, and begins in North America and rolls across the globe. Cyclists will take to the roads in a silent procession to honor cyclists who have been killed or injured while cycling on public roadways. In 2003, Chris Phelan organized the first Ride Of Silence in Dallas after endurance cyclist Larry Schwartz was hit by the mirror of a passing bus and was killed. The Ride Of Silence is a free ride that asks its cyclists to ride no faster than 12 mph and remain silent during the ride.

Over at Pacific Pedaling, Paul's got the info on the new website for the new and improved Willamette Valley Scenic Bikeway. More photos, more maps, more goodness! It starts at Champoeg and runs through French Prairie and Ankeny Bottom to Armitage park in Eugene. 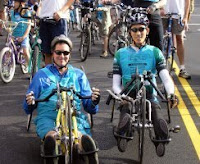 Oregon Disability Sports is holding an Adaptive Bike Clinic on July 12th. Check out hand-cycles, tricycles, all kinds of cool recumbents! There are bikes for almost everyone now, and if a diamond-frame two-wheeler isn't right for you, check out some of the options!

Finally, Cherriots is undertaking a major redesign, and they've released a plan of the changes. Check out the map and presentation here.
Posted by Salem Breakfast on Bikes at 9:45 AM