Closing State Street at the Carousel is Bad for Pedestrians and Bicyclists, Part I

Other than the inconvenience of pedestrians having to travel out of direction to the new southern entrance, the proposed crossing relocation is safer and can facilitate improved traffic access into the southern end of Riverfront Park. [emphasis added]

When it comes down to it, there are only two things you need to know about the proposal to close the State Street entry to the Carousel and Riverfront Park: The word "bicycle" doesn't appear in the analysis in any meaningful way (perhaps not at all, but I couldn't do a text search), and the passage makes clear how the City is prioritizing pedestrians.

The proposal is all about cars and shunting traffic through the new development.

Let's take a look at it in more detail. (This critique will focus on the staff report; part II will focus on a more general analysis of connectivity between Riverfront Park and Downtown.)

Here's the general project description in the City application to ODOT (p.11):

And finally, the map (comments indicated by "note:" are added here): 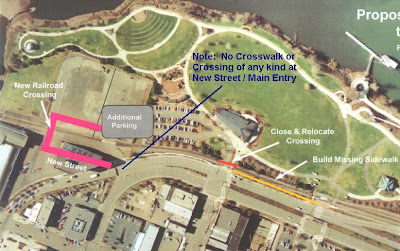 The consultant's recommendation is somewhat different: 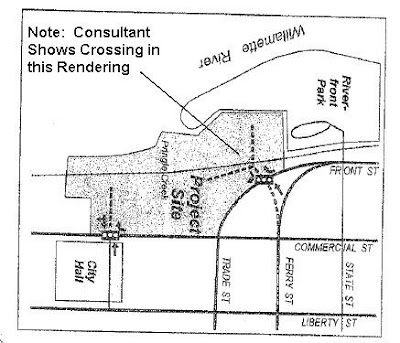 Nevertheless, it still poses problems for pedestrians and bicyclists: 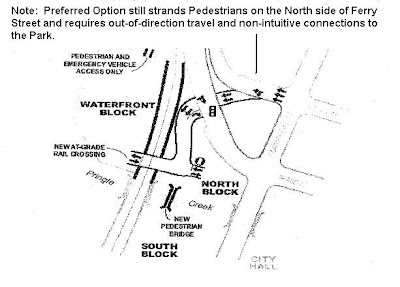 In an email Mark Bektel, Parks and Transportation Services Manager, offered clarification on the change from Consultant to City proposal:

It is unlikely that ODOT Highway Division (Front Street Bypass is a State Highway) will approve an at-grade pedestrian crosswalk to cross Front Street Bypass at the new street location. The new street intersection is on the outside of the curve and is close enough to the signalized intersection of Commercial and Trade Street that the traffic will back up to or through that location during peak travel hours. Pedestrians will have to cross the Front Street Bypass at Commercial Street, State Street, Court Street and Union Street to get to the Park or the new redevelopment. There is also planned an undercrossing of the Commercial Street bridge over Pringle Creek that will connect the City Hall Mirror Pond/Mill Race trail with the new redevelopment and then along the newly daylighted creek to access Riverfront Park.

Interestingly, the Consultant, and in turn the City, never investigated the possibility of closing the Court Street crossing. Here's the Table of Contents from the Consultant's report. The only thing investigated at Court was an over/undercrossing. On the surface, it appears the deck was stacked in favor of closing State Street. 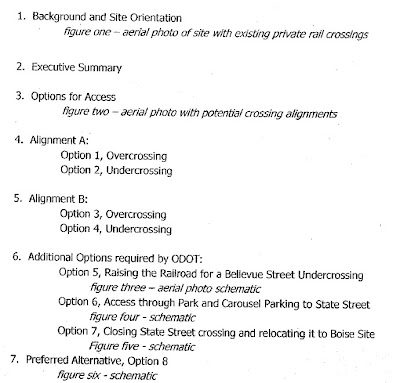 The one sentence about pedestrian improvements in the Consultant report is vague. The main benefit would seem to be routing pedestrians into the Boise project in order to channelize foot traffic towards those businesses!

It is clear that maintaining direct connections for bicyclists and pedestrians is the lowest priority for the City in this proposal and project. Boise could be a showpiece of sustainable design, something that emphasizes choice in transportation, but instead it is more of the same. It's all about cars and driving and long queues, and further separating the citizens of Salem from their Parks. In place of three direct connections, there would now be two: Union, which is difficult, and Court, which doesn't work so well for bicycles. The direct and intuitive connection at State Street would be replaced by a non-intuitive round-about way that zigs and zags, and requires bicyclists to use the sidewalks. It is about diminishing access.

In Part II, we'll look at the problem of connectivity, the ways bicyclists use the Court street and State street entries, and the existing siting of the Carousel and its relation to State street and downtown.
Posted by Salem Breakfast on Bikes at 3:30 PM