The Missing Path on River Road S near Roberts 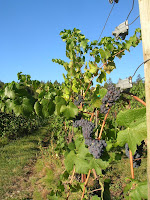 The grapes are almost ripe and ready for harvest!

Went out for a ride in the late afternoon and early evening and found a spot we don't always think about because it's outside of the city limits.

Just southwest of Roberts is Illahe and a bunch of new development. This map is from 2006, and several of the new roads are not mapped. The section in yellow without shoulders has been improved. Here's a map of the new Sandstrum Homes development. 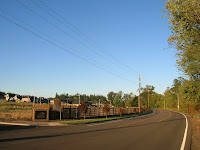 Here you can see a bike path on the left side of the image, the outbound, west side of the road. Coming into town, on the east side of the road, is a very minimal shoulder along a ditched Pettyjohn creek. In the middle of the road is a turn refuge. But to where? It's not possible to make an east bound turn! There are no roads, only the ditch, on this side of the road. The road builders inserted an extraneous turn lane and failed to stripe two-way bike lanes. This is nonsense! It certainly violates the spirit of the bicycle bill, which according to the ODOT summary:

requires the inclusion of facilities for pedestrians and bicyclists wherever a road, street or highway is built or rebuilt. It applies to ODOT, cities and counties.

Posted by Salem Breakfast on Bikes at 9:55 AM