What a great day outside! But not only was the weather terrific, odd and unexpected delights came my bikey way today. 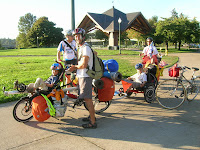 In Riverfront Park, I ran into this family from France. They are biking from BC to San Francisco with their four children! They may have crossed Canada earlier from Quebec, but I wasn't sure about that. While going to see if Travel Salem was still open, as they were looking for a hotel, Bob caught up with us. He offered his yard for them in which to camp, and noted that his wife speaks French. What a wonderful coincidence!

They were riding two recumbent tandems with a tag-along for a set of two triples. How great is that!

They have a website, which uses google translate into English, but it sputters on my version of firefox. Can anyone help with translation?

We have had a delightful visit with Arnault, Giselle and their four children (ages 2 to 11). They are on a year long trip traveling in the US (through November) and then on to South America (Chile, Peru and Bolivia) The US part of their trip started in Quebec in June and they will fly out of San Francisco. They've spent the last couple of weeks in Oregon. Their year long trek is less about cycling and more about seeing the world and engaging with people they meet along the way. It has been a pleasure to be part of that adventure.

The impressive combination of bikes suggests that they are accomplished cyclists, but Giselle explained that this is something they've taken on for just this trip. Before then they were just Sunday cyclists. What they've managed is impressive if a bit daunting. However, I also understand that they haven't cycled all the way, taking Amtrak or Greyhound parts of the way. All in all it's quite the feat.

I felt a bit guilty shepherding them up the hill to my house...It was the end of a long day for them, and the climb up the hill with these monster bikes with their heavy load was a workout for the whole family. They definitely earned the showers and quiet night they'll spend with us tonight.

Tomorrow they'll be on their way to the coast, though I think Arnault is still debating about whether to go to Corvallis and Eugene first, or directly to the coast and south.

Earlier, I found some other Salem delights.

One of the MWVBTA projects is to identify low-traffic alternatives to the network of bike lanes striped on busy streets. In some cases, though, like that of Liberty south between the Y at Commercial and Browning, there aren't even bike lanes. In fact, the whole stretch is a sticky wicket. 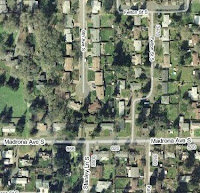 I was investigating one alternative, and going north on Stanley, you appear to deadend at Madrona. Hidden between two houses, however, is a cut-through to the cul-de-sac on Sixth! I would have never found this without Beth telling me about it! Thanks, Beth! It's the kind of local lore about hidden things that rarely makes it onto maps, alas. 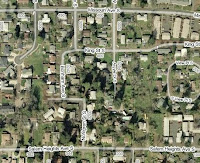 At little to the north and east, as you drop down the hill at Bonham, at the intersection of Bonham and King is a tiny little park! Bonham Corner. 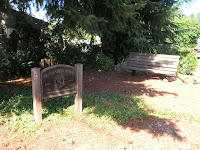 Bonham Corner has a park bench, a little sign, and is a small piece of public space carved out of odd lots. If only we had more of these!

Just a terrific late afternoon and evening to be on a bike...I hope you found your own delights!
Posted by Salem Breakfast on Bikes at 6:32 PM