The paper published questionnaires for 51 twenty- and thirty-somethings and has been asking for community voting. As partly a popularity contest, the final selection may not necessarily represent the most interesting young adults in Salem. Nevertheless, it is a way to look at what readers of the Statesman, a self-selecting bunch these days, regard as important in the next generation of community leaders.

So the good news is that 16% of them talk about the importance of bicycling and wish it were easier to bicycle in Salem. 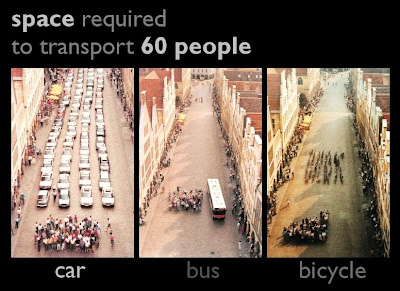 How great would it be if 16% of Salem trips could be made by bike! That's about ten times what our current "mode share" for bicycle trips is, and that would very cheaply solve Salem's traffic congestion problems! It would also help with community health and climate change.

The bad news is that 84% of them didn't think bicycling was important enough to mention, not even as something other people should do and as something the community should regard as an important part of a rational, sustainable transportation policy, properly responsive to the likely effects of climate change and increasingly expensive energy.

So what does this tell us? That bicycling is more important to future community leaders than the current crop of leaders themselves think. But it also tells us that we advocates for bicycling have work yet to do as far as selling bicycling as a central part of future transportation solutions.

Anyway, a tip of the cap and helmet to: