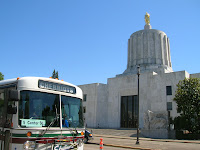 State Parks doesn't like the temporary Transit Mall, according to the Statesman.

By the end of the week, the state parks department wants the transit district's Cherriots buses to leave the site in front of the Capitol. Cherriots was talking with state officials on Wednesday in hopes of extending the deadline into next week, which would provide more time to get the Cottage Street NE location ready.

On the surface this is hugely disappointing. 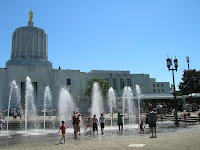 The Jane Jacobs reading has been on hiatus, and perhaps this is a good time to start is up again. Citing the Washington, DC, architect Elbert Peets, she notes:

What is happening is this: the government capital is turning away from the city...From the Chicago Fair of 1893 came the architectural ideology that sees a city as a monumental court of honor sharply set off from a profane and jumbled area of "concessions"...There is no evidence, in this procedure, of feeling for the city as an organism, a matrix that is worthy of its monuments and friendly with them...The loss is social as well as esthetic...

Working with Cherriots to enliven an otherwise dead zone in the the city, a zone constituted by a single purpose, and promptly emptying at 5pm daily, the Capital Mall could have enjoyed two strong uses and developed some of the life it so desperately misses. 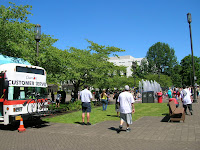 This is a sad insistence on what Jacobs calls the "Great Blight of Dullness."

Parks should love the ways that the relocated transit mall gives people an actual reason to enjoy the mall park. As it is, apart from the fountain and the glories of the springtime cherry blossoms, the mall remains isolated and empty of real reasons to visit or use it. It lacks amenities, cafes, things that would send pulses of people to it at different times throughout the day. Here is vitality and diversity! What's wrong with that?
Posted by Salem Breakfast on Bikes at 9:59 AM

Yes! I was commenting on that exact thing just yesterday. The Capitol mall area has been so lively & much more pleasant these past weeks. It makes the Capitol more interesting, and it's such an incredible ambiance, compared with the drab Courthouse Square.

Well observed! The Parks folks are like the librarians of old who took as their primary duty protecting the books from the patrons.

Of course, this all just shows again that the mindset dominating state government in Salem is that all respectable people arrive anywhere in cars, others should be hidden away from the view of decent people.

What I especially love is the irrefutable evidence that state government is insanely attached to cars: the closest monument to the capitol, facing the capitol front, the monument in probably the most perfect spot for a memorial in the entire state, is a stone commemoration a PARKING GARAGE! Doesn't that tell you something?

Well, it looks like a teensy bit of a respite. A week's worth, anyway. A commenter on the SJ remarked that "It will be nice that our State Capitol will no longer be a bus stop, looks pretty tacky with the trash cans & porta-potties." The urge to sort and decontaminate remains so strong.

It's too bad the State can't seize this as an opportunity to publicize transit and greenhouse gas reduction. Like HB 3543, you know? They could put bikes and electric cars front-n-center with transit!

It's cheering, though, that at least some people appreciate the hub-bub & vitality. Glad to read your comments!

Here's more on the rationale.

"Our Director was concerned about the bus traffic in the area of the wall of water fountain that is a high use area for kids. The feeling also was that it wasn't appropriate to have the stack of buses essentially dividing the Capitol Mall during the tourist season. The master plan for the park and for the Capitol Building identifies creating a stronger connection and continuity between the Capitol Building and the mall area by changing the surface treatment on Court street and necking it down to two lanes of traffic."

I agree, it Hs brought TONS of people to the Capitol Mall area and especially on these 80+ degree days it is needed to have that cool water there. I don't view it as unsafe to kids, not any more then kids being t the regular transit mall, parents are alway the ones needing to be responsible for their kids safety no matter where they are.